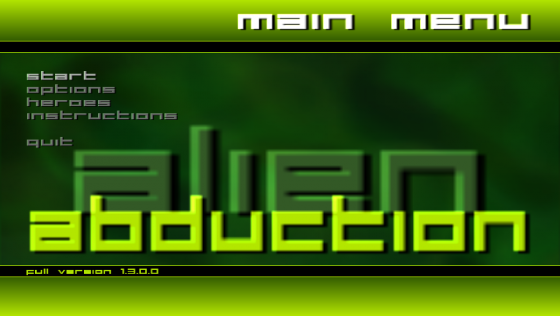 If I had to compile a list of my all-time favourite arcade games, Eugene Jarvis' Defender would be guaranteed a position in the top five - despite the original cabinet's awkward controls and the game's steep difficulty. Its classic game-play has inspired scores of ports over the years (official and otherwise), and Alien Abduction is one of the more recent and faithful tributes to the Williams masterpiece.

As is the case with Pulse Blade (also reviewed in this issue of RGCD), Alien Abduction isn't a new game, but rather a full free re-release of a previously shareware title. The developers (Pumpkin Games) have recently made the highly commendable decision to release this and their future games as freeware, which is great news - especially when you take the high quality of their current two titles into account.

Anyway, that's enough background - let's get on with the review. As mentioned above, Alien Abduction is a faithful reworking of the original game and features all the expected Defender mechanics with a few minor tweaks here and there. First of all (and most noticeable) is the fact that the game is presented in psuedo-3D, with future-retro stylised polygon-based environments and entities. However, Pumpkin Games have kept the game-play within a 2D playing field - thus avoiding the unnecessary and often made mistake that many developers fall foul of when updating or remaking an old title. Then of course are the minor changes that make the game unique; the little humans from the original have been replaced by 'energy crystals' distributed along the top and bottom of the map and your mission is made significantly harder due to your ship having a limited amount of fuel (and therefore relying on regular visits to fuel depots). Other additions to the game-play (aside from the many different alien types) include a multitude of power-ups to further enhance your ship's alien-blasting capability, various play-modes (Points Battle, Time Attack & Sharp Shooter) and unlockable extras such as new player craft types and level packs. 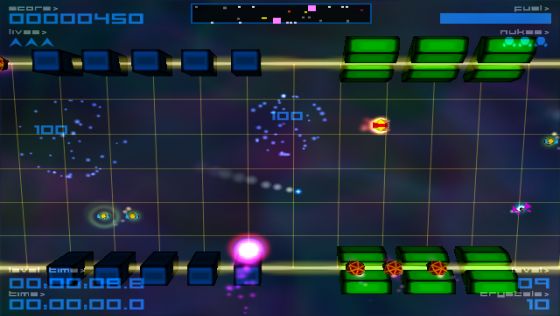 For those of you unfamiliar with the original Defender (although I can't imagine there are any readers out there who haven't played it), the principle of the game is simple. The player's goal in Alien Abduction is to defend the energy crystals from being abducted by the alien invaders, whilst simultaneously clearing each level of the waves of enemy craft. If a crystal is seized by an alien lander from its starting location and transferred to the barrier on the opposite side it transforms into a considerably more deadly mutant - a super-fast alien ship that homes-in on the player's craft. If all of the crystals are destroyed then the defensive lightning barriers fail, resulting in the level being swamped by invincible alien hunter craft and most likely it'll be Game Over for the player soon-after. To make life a little easier, Pumpkin Games have made good use of the in-game sound effects - you'll soon recognise the warning signal that a crystal has been abducted and by quickly checking the on-screen radar you'll be able to see where the alien is and hunt it down. It's also worth noting that the radar has been well-implemented into the game, with different colours representing each entity - including the vital fuel depots and power-ups.

When Alien Abduction was released back in 2005 it received a great deal of acclaim from indie-gaming and shareware review sites and it's obvious why - it's an awesome game and more than worthy of the original shareware fee. With versions available for both the PC and Mac, support for joypads and including a comprehensive level pack editor, it seems almost wrong that Pumpkin Games are now giving it away for free - after all, it's a commercial quality product that is only marginally bettered by the clearly-inspirational releases from Pom-Pom (Mutant Storm and Space Tripper). The presentation is flawless and the simple and addictive game-play is near identical to the original arcade classic.

In conclusion, Alien Abduction is an essential freeware release. Now if only Pumpkin Games would re-release Ultratron...

An essential freeware release... The presentation is flawless and the simple and addictive gameplay is near identical to the original arcade classic. 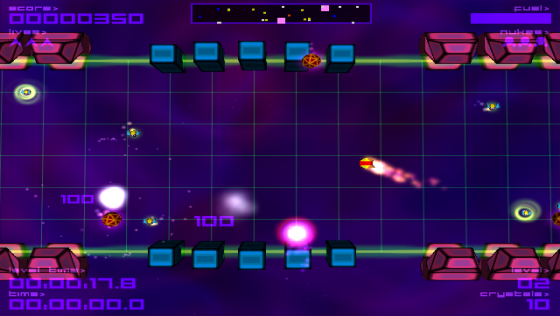 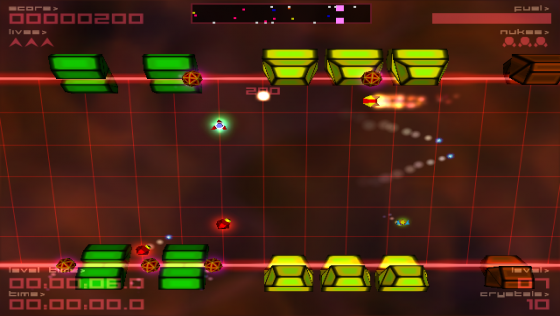