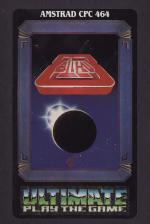 The stunning successor to the mould breaking Knight Lore is in the tradition of Ultimate games that give amazing graphics and game-play and an addictive and original task. The alien 8 of the title is a robot who you have to control in your quest to activate 132 'cryonaughts' aboard a space ship.

The display is in superb 3D, albeit very similar to that of its predecessor, and shows the room in the ship you are in along with any obstacles, traps or scenery. At the bottom is an inventory of what you're carrying, a light year clock time limit and the number of chambers containing cryonaughts that you have activated.

The cryonaughts are found in chambers where a flashing group of stars indicates a type of valve that has to be plugged in. There are 24 such sockets and plenty of valves but your problem is that they can only be got at by working out how to solve a puzzle. The nature of these puzzles are unique to the two Ultimate games, since they depend on the 3D graphics which allow you to move and use objects in a way which no one else has achieved. There are lots of dangers like killer clockwork mice, alien egg shells, pyramid spikes, pads with tubes on them, disappearing floor blocks and mines These are formed into obstacles, traps and devious pathways that threaten your every move.

There are four types of valve but you can only carry three at once and are fighting against a time limit before all the cryonaughts are lost.

N. Movement slowdown when the processor has a lot to cope with. N. Has many similarities to Knight Lore. N. Occasional unavoidable loss of life can be extremely frustrating. N. Liable to give you insomnia.