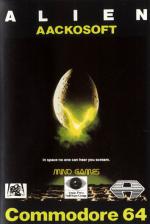 This is the game of the film. You take command of the crew of the Nostromo as they try to rid the ship of the alien. It is extremely close to the film and can be just as spine-chilling.

The cassette was quick and easy to load and the program was presented with suitably sombre music. You choose between the full adventure or a shortened version.

The object of the game is to rid the ship of the alien and get back to earth with as many of your crew as possible. You have a map of the ship and various monitors to assist you. These will show where you are and the state of play of the crew.

At first I was disappointed as alien is neither wholly adventure nor arcade, but after playing several times I can say that this game grows on you. The sound effects add to the suspense as does the sudden arrival of the monster.

The sound effects add to the suspense as does the sudden arrival of the monster.