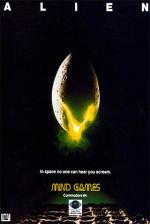 Based on the now infamous film, this game is a sad disappointment, with appalling graphics, sickly colours and very little action.

You choose from seven different personalities, who all reside in the Nostromo, a space ship. The idea is to command the crew and stop the Alien reaching earth. Easier said than done, since the characters have a habit of lodging themselves in one place and not budging an inch, no matter what you do, while the alien darts around all over the place - usually clockwise, but sometimes anticlockwise depending on where you shove the joystick.

You are supposed to be able to move your characters through the three decks, collecting weapons as you go - the only problem is that if you select 'Middle Deck' you are liable to find yourself on 'Lower Deck' instead. Your characters will have a habit of disappearing without trace while your Alien shows distinct signs of hyperactivity and frustration, unable to find a living thing in sight. Poor Alien. You end up feeling more sorry for him than for the characters, especially since his aim is survival and he needs unsuspecting people to jump on.

What is supposed to be vaguely frightening background music sounds more like an old Coke can dancing on a derelict tin roof - irritating, to say the least.

Meanwhile, the bottom of the screen is a little more helpful and tells you what morale is like as well as who else is in the vicinity - it also reports on your character's progress.

For some reason the characters in this game are practically immobile, or just plain lethargic - it seems odd that the joystick will motivate the alien but not the character, giving an overall impression that the game would be better called Cluedo.

The last straw is the occasional written information that comes up on screen. This is impossible to read, as the characters are so ill-defined and in different flashing colours, which bleed into the black screen background, giving the impression of a psychedelic rainbow rather than written information.

If you're in the Lab or the Living Quarters and you remove the grill, your character will disappear altogether and perhaps leave a lone cat leaping aimlessly around the screen.

Even the Alien gets scared and has to be found from time to time - I eventually located him cowering in the Infirmary.

Argus Press Software say that, in order to succeed with this program, you have to understand people and predict how they will behave. This appears to be a gross exaggeration as the only thing you have to predict is how the joystick is going to react.

The game has less to do with people than anything I can possibly imagine and I wouldn't shell out 30p on a game of this sort, let alone the asking price, which is phenomenal for what you actually get.

Programmer Paul Clanset may have had good intentions but he certainly doesn't do justice to the film, with the game's Alien behaving more like Tinkerbell in Peter Pan than a monster that gets inside one's digestive system and fights its way out when it feels like it.

The programmer may have had good intentions but this game certainly doesn't do justice to the film. The Alien seems to behave more like Tinkerbell in Peter Pan than a monster that gets inside one's digestive system and fights its way out when it feels like it.