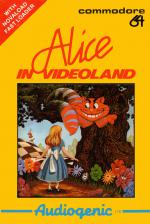 Alice Goes To Video Land is finally on sale - no less than eighteen months after Audiogenic announced it! Has it been worth the wait? Well, yes - it does have extremely good graphics. I can only think of about a half a dozen other games that are quite as pretty.

Alice comes on disc for the C64 and is basically four different games that load separately - though your performance in one will affect your chances in the next.

The prettiest screen, previewed exclusively in C&VG last summer, features Alice walking along in the countryside before she falls down the rabbit's burrow.

She crashes through into a strange room where she has to collect potions, slices of cake, keys and a basket in which to carry her goodies. When she falls to the bottom of the room, she can walk right or left using the keys to enter various rooms and score points. There is a nasty alarm clock floating around the screen which, if it makes contact with Alice, will end her game.

Game two is the best of the four games. Alice is in a colourful garden where she has to hop from mushroom to mushroom catching the rocking-horse flies which turn into red balls.

It's vital that Alice catches as many balls as possible as she will need these to take part in the croquet game on screen four.

Game three is a bizarre chess game where you have to get Alice to safety to the other side of the board with the assistance of the White Knight. Nasties like the Jabberwock and Tweedledum and Tweedledee try to push her back.

Screen four is the croquet game where Alice has to hit the red balls through the hoops before the Queen of Hearts jumps on them and squashes them.

Little girls will love Alice - it's tailor-made with them in mind. This is not to say it doesn't have anything to offer the seasoned gamer. I must confess, though, I was a little disappointed. The scenario is so convincingly drawn, it seemed a shame that the game wasn't more challenging. Perhaps an adventure-style of game might have provided that extra element of challenge.

A pretty game! The scenario is so convincingly drawn, it seemed a shame that the game wasn't more challenging.