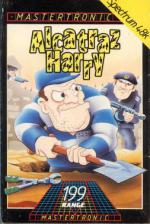 Alcatraz is the famous old American island prison in San Francisco Bay. The cover of this new game from Mastertronic - a 'unique blend of arcade, strategy and adventure ' - has a cover which reinforces the belief that it is an American prison break game. So it comes as rather a surprise to discover in the onscreen instructions at the start that you are in a prison camp from which you must escape with secret files that the allies need. Sounds more like the Second World War!

You start the game in a compound into which you must place 30 items of equipment. A flashing X marks the spot at the bottom centre of an 8 by 18 grid (144 squares). You collect escape equipment as you move around. At the start you are told the sector number where the secret files are to be found, once all the equipment is collected, and your present sector number is displayed whenever you want in a status report. After collecting the equipment you must make your escape via a hole in the North fence after passing through a minefield.

Besides yourself in the camp there are guards who will arrest you for loitering should return to that sector again, there are tunnels which lead to other parts of the camp and cars which can be used for driving back to compound where the equipment must be deposited.

Harry, if that's who he is, is moved about by four directional keys. Setting off from the compound, he can be moved to any other screen by touching the edge. The objects to be collected, which consist of six types, ropes, ladders, wire cutters etc, are usually found on the right of the screen while a blockhouse or guardhouse is on the left. The camp perimeter squares are indicated by the fencing. If Harry goes into a tunnel there is a screen showing a diagrammatic cross section of the ground with the tunnel burrowing under the imagined wall of the two connecting sectors. Should he escape with all the equipment, the minefield part of the game takes the form of Mined-Out in reverse, you are shown the positions of the mines very briefly and then have to work your way across. Help is given by the border colours which warn of the proximity of one, two or three mines a step away.

'The graphics in this game are of a reasonable size but are not terribly well animated (in fact your man looks like he's had one over the limit)! Overall the game is not exactly a great game but on the other hand for what it is, it does represent value for money at £1.99. '

'Although you are allowed to see the grid with the 144 sectors in the instructions, and are led to believe that this info will be repeated if you press S for status, it isn't. You are merely told which sector number you are in -no indication as to how the sectors are numbered. That means that if you are going to take the game seriously you must map your moves, especially if you don't want to run into a guard for the second time and get arrested. The real point is whether you're going to take the game seriously! To my mind it is good value for a young child playing with a parent, but for anyone seriously considering an adventure with arcade overtones, I wouldn't bother. Although the guards look authentically like World War I French soldiers (!?), Harry looks like Mr. Midshipman Easy dancing a hornpipe.'

'Where does the 'unique blend of arcade, strategy and adventure' description fit into this game? A very primitive idea and program. You (well your legs) move in a very odd fashion, almost as though they have been broken. This game is very still in the sense that nothing seems to move or happen. Keyboard layout is good but response time is slow. Colour, sound and graphics have been poorly used. Still not really worth the cheap price.'

Colour, sound and graphics have been poorly used. Still not really worth the cheap price.