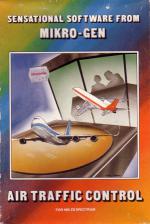 Though a substantial program, Air Traffic Control loads very quickly using Mikro-Gen's Hyper Load facility. It is fascinating to watch, and interesting to play. It's a simulation of controlling a section of air space.

The planes are shown with a market and their call-signs on a simulated radar screen which overlays a map of the area. Beacons and air lanes, and a danger area are also shown. You must give each plane it's own air space, at a height and speed such that no collisions occur, and then hand it on to the next sector.

Military aircraft which are not under your control cross your sector as do slow moving twin prop aircraft. You must ensure adequate separation, even when a 737 depressurises and has to drop in height.

Much more information such as destination and aircraft type is also given, so that even on level one your interest is held. Level nine is so crowded that not even a real controller could cope.

The package has a keyboard overlay and a manual which must be studied.

As absorbing as a flight simulator, but different!

As absorbing as a flight simulator, but different!