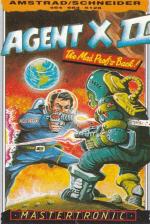 The Mad Professor is back with a vengeance. He has moved into an underground base on the moon and from there he plans to unleash the Zit-ray on the unsuspecting public. This hideous device will cause an outbreak of terminal acne all over the planet and make the prof a killing selling spot remover cream.

There are three parts to the game and each is completely independent of the others. The first game is a shoot-'em-up with loads of cute aliens for you to shoot. The screen scrolls horizontally from right to left and the aliens swarm on in a variety of formations from either side of you. At the bottom of the screen is an energy bar which is depleted whenever the aliens hit you. Running out of energy causes the game to end. At the end of the level, a giant brain appears which you shoot until it explodes.

Part two is inside the moon and you have to log on to the computers by finding the access codes to them. Access codes are obtained by bumping into red spheres. The screen scrolls vertically as you move up and down within the complex. Aliens again drain your energy and running out causes death.

Finally, there is a breakout-type game in which you have to clear the screen of coloured blocks. You control a bat at the bottom of the screen while another bat moves rapidly across the upper part of the screen. If you miss the ball when it is coming towards you then your energy bar is depleted until you run out and the game ends.

All of the games are colourful, but the first has by far the best graphics. The tune in the first game is beautiful and fits in nicely with the almost cute aliens that you have to shoot. Sound in the second is not as good and the third game has terrible music.

There is no score indication at all and you end up feeling like you've got a game with no real objective. It looks nice but there is just nothing to do.

The music and graphics flatter to deceive. The first part is incredibly cute and good-looking, and immensely boring to play. The next two parts are slightly less impressive-looking and sounding but only marginally more interesting to play. I'll settle for just listening to the music.

Not even great graphics to impress here.

Overall 38%
If the game was as good as the sound and graphics then this would be a Rave.

If the game was as good as the sound and graphics then this would be a Rave.