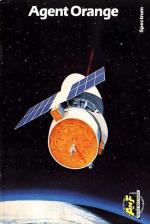 Rick Scragworth: Intergalactic Farmer. Doesn't sound too hot, does it? If a title like that leapt out at you from the shelves with hunky illustrations of a Harrison Ford type driving a combine harvester, what would you do? Shell out or run out?

With new ideas never thinner on the ground, more and more bizarre variations on old ideas are very much the soup of the day. And the main course, served by A'n'F, is Agent Orange, the world's first pastoral shoot 'em up. Coming soon - Gauntlettuce, the classic vector graphics zaparama Compost, and of course Way Of The Exploding Tractor. Well, maybe not, but you never know!

So, wassitallabout? Well in Agent Orange (which is not, incidentally, the name of a CIA-employed citrus fruit), you play an intergalactic farmer, sowing alien seeds on hostile planets and reaping the benefits - if you can stay alive, that is. Each time you return a certain quantity of grain to your home planet, you can trade in your ship for a bigger one, which is just as well, since the aliens on each successive planet get nastier and less easy to dodge.

The eighth planet, should you get there, is where you'll find the elusive Agent Orange, which turns out to be a sort of mega-weedkiller. Once you've destroyed the alien ships patrolling each planet, the weeds are in fact your greatest enemy, as they slowly cover the surface and throttle your own plants. The plants' growth follows the same rules of their real counterparts, so you'll have to wait until they're fully matured before you can harvest 'em. Be careful you don't overload your ship, though, 'cos if you do, kerboom!

This is an odd sort of game, combining strategy and arcade elements without really getting the best out of either. It's not superfast, but it does sport some excellent Uridium-type graphics to compensate for its lack of speed. Farmers should love it - and you may well like it too.

It's not superfast, but it does sport some excellent Uridium-type graphics to compensate for its lack of speed. Farmers should love it - and you may well like it too.