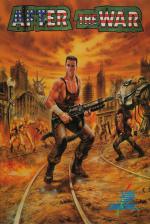 Nuclear apocalypse - the ultimate catastrophe - has happened, but the streets of Manhattan are still filled with muggers. Jonathan 'Jungle' Rogers is in the thick of it: his aim is simply survival. Located at the headquarters of the murderous Prof McJerin, there is a XV-238 launching platform. Using this, JR can escape to the outer colonies!

Rogers's fight is essentially a horizontally scrolling beat-'em-up. The first of the game's two loads is split into three phases. The first takes place in post-apocalypse Manhattan. Besides the muscle-bound muggers, there are deadly mines and a superbaddy at the end. Phase two is more of the same, only with a different background and the baddies have guns! The final phase is the toughest of the lot, set at the subway entrance where you encounter 'R.A.D. Bulls'.

Amiga owners get much longer levels, plus a wider variety of villains including men with guns and chains. To hurry you along there's a radiation count: when this time limit runs out you lose all your lives!

The second load takes the player inside the subway, with yet more baddies, only now you're armed with a massive machine gun. Combat androids, mutants, and huge rats are all out to get you. Complete this level and you get into a sleek space station infested with yet more villains, plus robot guns.

Post-apocalypse New York, humans reduced to mutants, and plenty of blood-splattering action - it sounds like just my sort game! But sadly Dinamic have forgotten to fully work out the gameplay. The first level of the C64 game is particularly dull, and level two isn't much better - despite some neat robot guns.

The Amiga game is bigger with a much more professional feel. Beat-'em-up addicts, at least, could enjoy this one although they'll need to be good to cope with the vicious, rabid dogs. Your gun on level two is great, complete with spent cartridges spewing out, but for the price you expect more. Even I got sick of slaughtering mutant humans after a while.

The Amiga version of After The War is blessed with some great graphics. It really is just like playing a glossy comic book with some nicely-drawn baddies. Load two features an ED209 which puts the one in RoboCop to shame; it's big and moves well. But there's plenty of small details too - like how some of the men wave others on into the action. Unfortunately, the actual gameplay is both very difficult, and repetitive.

The C64 has some nice background graphics, but the main character moves as if his legs are made out of rubber. The first villains are easy to kill, while the end-of-level baddy is too tough! Similar problems haunt level two, and as the levels are so short the game resembles a mediocre budget release with some above-average graphics.

Graphics 60%
Big and bold graphics, with some attractive backdrops, but the main sprite and many of the baddy characters are disappointing.

Graphics 86%
Initially confusing, but the further you get into the game, the more appealing the cartoon style gets.

Sound 78%
Good machine fun FX, yells and screams sound as weird as most Japanese coin-ops. Good use of stereo.

Hookability 65%
Fairly easy to get into, although mastering all the moves requires practice.

Lastability 58%
This is one tough game. The second part is the best, but variety is limited for £25.