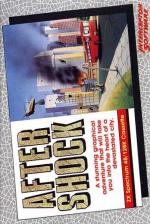 Aftershock may not quite be a shock, but it certainly comes as a surprise if you've been following the Interceptor adventures from Banner & Greer. And it's a pleasant surprise in some ways, though I certainly don't include the price in that. At £9.99 it's unbelievably high for what seems to be a pretty conventional adventure.

Dave Banner's text has never exactly been in danger of filling the screen. His ideas of atmosphere is, 'You are in a green room' rather than, 'You are in a room'. That's all changed now, though. What's this we read in the first location? A shattered city...distorted shapes... fires blazing out of control... sirens... and so on for a screen's worth. Not bad at all.

The reason for the fires and sirens? A series of earthquakes, perhaps prompted by underground nuclear tests. You are the bod who helped design the local nuclear power plant that's in danger of exploding thanks to a fault in the cooling system. Where are the plant's loyal and faithful staff? Buggered off at the speed of light, that's where. So who has to fix the fault? Got it in one.

Your first problem is how to get out of your office, as there's been a power failure in the lift system and the stairs are blocked by flames. Well, the text might be longer but it seems to be the fussy old Interceptor parser we know and don't love. In your office there's a pen on your desk. GET PEN. 'Try another command.' TAKE PEN. 'Okay' Come on chaps - even with Greer's greedy graphics there must be room for both GET and TAKE. Search the lift and you discover a panel in the ceiling, too high to reach but a nearby chair can be dragged over to assist. Having removed the panel, the text doesn't tell you what's revealed. Is it a hole, a passage or what? I sat for several yonks typing GO HOLE, JUMP UP, CLIMB UP, GO PASSAGE, ENTER PASSAGE, LEAVE LIFT before hitting the right combination of words. As I've passed on the solution to a few friends unable to get beyond this point, I think it fair to tell you that the right phrase is: TFIL FO TUO BMILC. Easy when you know it, but it takes a long time to find.

Thankfully, the adventure then opens out, as you roam around the city streets, down the flooded underground, into the storm drain and the maze of sewers, walking cautiously round the zoo.

The graphics I've seen have proved to be a mite disappointing from the usual impeccable pen of my hero Terence Greer. They concentrate more on detail than effects, but this is definitely one of those adventures I'll plug away at, rather than put away after reviewing. Pity 'bout the price, though.

Definitely one of those adventures I'll plug away at, rather than put away after reviewing.