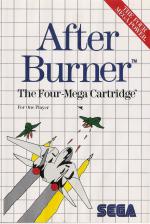 This is the big one.

Sega's After Burner is here for the Sega Master System, and it is driving me mad!

Do not, I repeat, do not read the following review or your life will not be worth living if your local shop has sold out of this game. After Burner is absolutely brilliant. Sega has caught the essence, the sheer guts, of the arcade version in a megabit cartridge.

After Burner, as you probably know, is the latest mind-blowing arcade flight simulator to emerge from those Japanese arcade masters Sega. You have to take your enemy fighter through eighteen battle scenes and land on an aircraft carrier on completion of the mission.

The prototype cartridge I reviewed has a full title screen with the logo in big letters shifting off the screen to show a couple of pics of a fighter in mid air and a technician giving the OK for launch. You are then treated to a full demo of level one.

On pressing the fire button, the launch sequence is shown. The game places your fighter on the deck of an aircraft carrier then it slowly accelerates upwards into the sky as a voice commands you to 'Get Ready', as the ship falls away under you.

The screen changes to a sea scenario and you are shown the stage number (1-18), lives left and score. Control is fairly simple with up/down/left/right and diagonals. The key to good Afterburning is knowing when to pull up to avoid missiles, and how to use the 360 degree roll.

You have two weapons to take out enemy - machine gun and missiles. Machine gun is unlimited in supply but missiles are limited and you can top up your supply at various points throughout the game. To fire the machine gun, you simply press button two, missiles have to lock-on to a target in their display zone on screen before launch can occur - timing is vital.

To complete a level you have to survive a set time period, and making it darn near impossible are the enemy fighters which stream in from all around the screen.

You can lock these suckers in your sights and blow 'em away with some really cool moves *but* it does take time to master the key moves.

There are different fighters and patterns of attack, some come at you launching homing missiles which are hard to shake off, others come in from the left and right. There is also a fighter which almost somersaults at you while firing and quickly flying up off the top of the screen.

You lose one of your three lives if you're hit by a fighter or its missiles. The destruction scene for death by missile is impressive. It's an exact copy of the arcade scene where you plummet down towards the ground with a plume of smoke piling out behind before hitting the ground with an explosion.

The terrain below you varies between sea, forest, arctic tundra and desert.

You can make your fighter do a 360 degree roll with the whole screen rolling around you - it is a mind-blowing horizon tilt. It is like picking up your brain and rolling it through 360 degrees.

I did find a rather large hole in the play as you could play through levels one to twelve simply by holding the joystick in any of the four diagonals and missiles and fighters simply missed you. I assume this will not be possible in the finished version!

If you survive the first three scenes, you get to refuel your fighter and load up with more missiles. This can be a tricky manoeuvre as you have to position the fuel cable from a tanker plane into your missile sight and then trigger it. You also get a hit count and points summary every three stages, so the more fighters you take out the fighter your points tally.

At the end of stage six you get to battle a huge backfire bomber which lobs missiles at your plane. You have to dodge and weave away while trying to take it out. If you succeed, you are given a landing sequence where a tanker refuels the fighter and you zoom off back into the sky again.

It is very fast to play and may, at first, prove a little confusing because of its speed. The graphics are generally sharp and smooth although I must say I was surprised with the general standard as it is a 500,000 byte cartridge and I did expect a lot more of the graphics.

The trouble with producing home versions of such graphically stunning arcade games is that it's almost impossible to reproduce an exact copy of the arcade machine. In many respects, comparisons are worthless.

Nevertheless, Sega has done an excellent job on After Burner, it is the first in a new generation of console games.

After Burner couldn't have hit at a better time for Sega. With Nintendo blowing their company trumpet about having shifted millions more systems than Sega - the quick conversion of what is definitely the coin-op of the moment is bound to give Sega a boost.

Nintendo are so boastful about their dominance right now that they staged a mock boxing match at a lavish press do in Las Vegas recently. Kid Nintendo versus the Sega Cissy. No prizes for guessing who won - but out guess is that After Burner represents a fair old punch back by Sega.

A mind-blowing arcade flight simulator... This is the big one... This is absolutely brilliant.