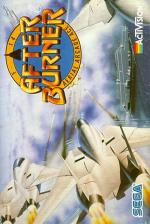 Out of the city and the air is anything but clear. Enemy aircraft fly over the colony countryside, strafing the roads, terrifying the people and destroying the landscape. Something must be done.

Since there are loads of enemies, their fighter craft are small short-range affairs, the kind of thing that can be easily taken out by a single high-powered jet fighter - an F-14, for example. Planes like this are expensive; the Air Force don't send them out willy-nilly and only the best pilots are sent on such missions. The plane's ready, you've been briefed - so shake, rattle, roll it! (I know it sounds daft, but I didn't think of it, honest).

After all the hype and promotion, the game doesn't live up to it... the C64 conversion of Afterburner is incredibly disappointing.

The graphics and sound are laughably bad, making the idea of a multi-load (which, incidentally, this is) a joke. The glitchy plane wobbles about in a flat sky over bland and blocky ground formations that do anything, but rush towards you in 3D, and the chunkiness of the other sprites has to be seen to be believed.

If you've bought this, then you have my commisserations.

I thought when I saw R-Type that Activision had got their act together as far as arcade conversions go, but I'm afraid that Afterburner has proved me wrong.

Believe me, when I came to write this review, I really looked hard for something good to say, some interesting feature - but I couldn't.

There's nothing interesting going on from start to finish. I can't confess to being a great fan of the arcade original, but I can still spot a bad conversion. I hope whoever bought this is happy with it, and their families keep paying the santitarium bills.

Graphics 26%
Drab and blocky on the whole, but some are really bad.

Hookability 24%
Flying a jet through Legoland is hardly the most thrilling of prospects.

Lastability 10%
All the levels are very similar and equally uninteresting.

All the levels are very similar and equally uninteresting.