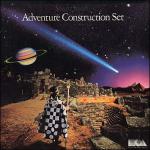 Most of you will have heard of The Quill and similar programs for the creation of textual adventures. This product has a similar purpose but is intended for graphical adventures. Due to the size of the beast, this package, unfortunately, is only available on disc. The format adopted is the usual view-plan of a scenario. Within an overall scrolling map of quite significant proportions are a number of sub-scenarios which are entered via portals or gates. These scenarios can be castles, caves or whatever and are comprised of discreet rooms rather than a continuous area. Which allows for some complex creations.

You can specify a range of creatures and characters which may be scattered about the scenario as can objects and weapons of your choice. All variables can be adjusted including the design of figures, objects, scenery and the specification of the character's attributes. To provide additional interest you can set up your own messages, and a range of music and sound effects are available.

The feel of the games tend towards the well-known dungeons and dragons approach with magic and fighting. Characters interact with each taking a turn. This allows the adjustment of a character's intelligence, actions and aggression. Overall, you can alter almost any aspect of the game giving great scope for creativity.

The package comes with a number of impressive demonstration games. Overall a powerful and entertaining package. The bad news is that the package does not allow standalone games which you could sell.

A powerful and entertaining package. Does not allow standalone games which you could sell.