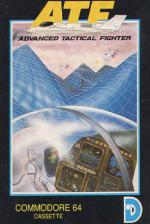 The ATF, or Advanced Tactical Fighter, is another of the new breed of super warplanes which are currently arousing so much interest amongst simulation programmers and players. In Digital Integration's game of the aircraft, the ATF is based in a randomly-generated world wracked by war, its mission to eliminate enemy land, sea and airborne units.

The game begins by showing a map of the war zone annotated with the positions of all allied and hostile emplacements, from factories to sea forces, which are then loaded into the ATF's target database computer. After checking the balance of opposing and friendly forces, the final step before take off is the equipping procedure, where a selected combination of cannon rounds, ASRAAMs, Maverick missiles and fuel are loaded onto the aircraft, bearing in mind that weight is at a premium.

Once in flight, the screen shows a 3D representation of the terrain viewed from behind the ATF, with hills and valleys depicted using an overlaid grid which conforms to the contours of the landscape. Above is a Head Up Display showing thrust, speed, altitude, heading, distance and heading to target, and weapons system activated.

To the right of the main screen is a short-range scan of the area under which is the flight computer display. The function of this screen can be changed to show a world map, weapons status, ATF systems status and target database which displays the distance and heading to any units logged into the flight computer, and also provides missile locks for Maverick missiles.

At the base of the screen lies a fuel gauge, message window and a series of warning lights which indicate incoming missiles, whether the ATF is close enough to a friendly airbase to commence an automatic landing procedure, the status of the undercarriage, and whether terrain-following mode is engaged.

Terrain-following mode keeps the ATF at a fixed height above the surface and because this makes the plane more elusive to RADAR, the pilot should encounter fewer SAMs and attacking fighters, which either appear behind the ATF or swoop in from the horizon. Taking hits lowers the efficiency of the ATF's systems.

Acquiring too much damage on all three aircraft ends the game with a bang. The computer then shows the final balance of power and rates the pilot's performance and score.

Another Stealth plane simulator?! Well, not quite. ATF tries to combine the more highbrow strategy and simulator formats with a speedy shoot-'em-up in the style of the elderly Buck Rogers.

In the end, this blend isn't successful, and although there's no doubting that the game has its technical merits, it just doesn't play well. The attacking aircraft hinder the gameplay rather than help it, particularly those which approach from behind.

The ATF doesn't manoeuvre like a plane in any other flight simulator, so you can't climb or dive away from a fighter until it decides to end its attack, usually not before it's riddled the ATF with bullets.

The manoeuvring problem also causes similar consternation when destroying surface forces, resulting in long, tedious periods of flying round in circles, missing targets and being shot down. As an arcade game, ATF is boring, and as a simulation, it's unrealistic.

The only feature lacking in ATF is variety of action. The basic problem is that it falls between the two stools of simulation and shoot-'em-up, without attaining the high standards set by either.

As a simulation it's lacking in detail: it's unrealistic because you can destroy enemy fighters by crashing into them, there isn't enough control over the ATF and the scenarios aren't diverse enough to warrant lasting interest.

As a shoot-'em-up it's lacking in intense action and range of movement, since it's impossible to shake off tailing enemies. These criticisms apart, the presentation is superb: the on-screen display comprises a fast and colourful 3D effect with short and long-range maps, and the status report, world map and attract sequence are all neatly polished.

Had the depth of the action matched this excellent front end, ATF would deserve greater praise; as it stands, it's just an average game.

Hookability 69%
The attractive idea inspires interest, but the unfriendly gameplay is discouraging.

Overall 60%
Crash-dives between the arcade and simulator stools.

As an arcade game, ATF is boring, and as a simulation, it's unrealistic.