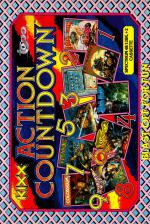 Odd one, this. Instead of bunging these nine games out one by one, Kixx has decided to squeeze them all on to one tap, and put them out at what seems a very nice price. Rather than review them all separately in detail (no space, I'm afraid), I'll just mark each one out of ten and add up the scores to get an overall percentage. Awight? Awight.

At least, I think that's the title - my notes are a little sketchy. You'll know it when you play it - a Spanish wild west arcade game with you as Dodge City's answer to Postman Pat, riding your wagon through hostile territory. Total rubbish, basically, enlivened only by the final message 'You are death'. Thanks, pal. 2

Ah, it's Arabian Nights time. Walk through the city, shoot people, and try not to gnaw off your arms with boredom. Dismal. 1

Ah, a reasonable game. This involves driving your Roman wagonette around the colosseum, avoiding boulders and so forth and trying to kill all your fellow competitors either by guiding them into boulders or by hacking at them with your axe as you pass. Not really very good at all, actually, but something of a masterpiece compared to the rest. 6

Aaah! I've played this before! You're a deep sea diver exploring underground caves and looking for treasure! It's rubbish! 3

Futuristic pinball-cum-combat game with some nice ideas, but it's all been so shoddily programmed that it fails on just about every count. Next! 3

Very odd, this one. You're in a burnt out wreck of a city, defending yourself from passers by with... a sword and a shield. Eh? They walk towards you, and you have to kill them before they kill you. Very profound. But where's the game? 3

Quite why it's called this I'm not sure. The actual game, a jeep racing thing set in a maze of streets and viewed from above, I am sure about. It's rubbish. 2

You play the devious pirate captain himself, running around the decks of his ship trying to find the treasure map hidden in one of many chests dotted around the place. But watch out! Your mutinous crew are all out to stop you! I dunno, some people seem to think it's rather good, but I can't imagine why anyone would want to play this dismally slow, turgid Gauntlet clone. 4

Together with one out of ten for Star Quality, I make that 30% all told. And that's generous. Keep a bargepole handy if you see this in the shops.

It can have an overall mark of 30%, but that's generous. Keep a bargepole handy if you see this in the shops.
Logout