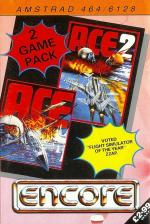 Two flying games on one cassette! Although both Ace and its sequel involve air-to-air combat, neither is really a simulator.

Ace is a one-player game, placing you in the cockpit of a anonymous modem fighter. Just choose a skill level, select your weapons and take off.

Targets include tanks, helicopters, other jets and the occasional warship. They all look pretty much the same, though, as they jerk past. Closer up, they do improve, but the game still isn't much to look at, with simple graphics and pedestrian gameplay, so there is no sense of speed or excitement as you fly around, navigating with the simple strategic map display. This also displays other airfields and air-to-air refuelling tankers. The refuelling is done quite well, if very simply. Options also exist to select day/night or the season. Winter is recommended for green screens.

Ace 2 has a split screen, allowing two players to dogfight. Again, it is jerky and slow, with the horizon rolling in 30-degree chunks. The update for each screen is such that evasive action doesn't register on the opponents' screen for a few seconds, giving ample time to fire. The 3D effects also seem shaky, so many skilful Tom Cruise manoeuvres are useless. Being able to see the enemy's cockpit display doesn't improve the cat-and-mouse aspect either. As in Ace 1, you should use cannon to down the foe. You also have missiles, but these seem useless and only slow up the screen even more.

Both games will be frustrating to the sim buff, owing to their overpowering simplicity and lack of atmosphere, but together their cheapness might appeal, possibly as a diverting, if slow, dip into old-fashioned three dimensional arcade games. The dogfighting in Ace 2 is a novel touch, making it much better.

My word, flight sims have come a long way since this one first saw the light of day! Can you go wrong for £2.99 though? (Yes, probably.)

Flight sims have come a long way since these two first saw the light of day.
Logout