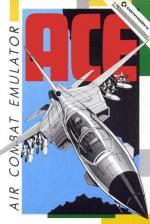 The enemy are advancing, they landed on the coast and discharged a massive force of tanks, helicopter gunships and aeroplanes. As the rest of the army seems to have taken the day off. You are the only hope.

At your disposal, you have only 3 AWAT combat aircraft with which you must defeat them.

Before you scramble for each sortie, you must select the weapons that you'll use depending on whether you're going after tanks, planes or ships then it's into battle.

Although you have to fly the plane yourself, ACE is more than just a flight simulator as you use the plane's instruments as a combat aid.

Speech hammers out warnings of missile attacks and approaching enemy forces so that you need never take your eyes off the action.

When you've driven back the enemy further challenges await as you can do battle in both Summer and Winter, at day or night at different skill levels.

ACE was first released on the C16 and has since been converted for the expanded Vic-20 and the C64. This is the best version yet.

This Plus/4 version of ACE is the best version yet.