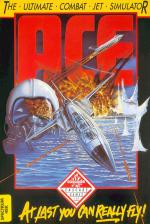 Eeek, an enemy fleet has invaded our sunny shores. The landing craft beach on the shingle and offload the tanks, troops and surface-to-air missile bases. Enemy fighters and helicopters cover the ground forces while the fleet anchors off the bay, waiting to discharge more troops or evacuate the land tomes if things get too hot.

At the Allied base the radars start bleeping. The warning sirens begin to scream as the invasion becomes apparent. As you race towards your aircraft the gravity of the situation begins to dawn on you. Unless the enemy invaders are destroyed Great Britain will fall into foreign hands.

The Allied base possesses three AWAT combat aircraft. Its up to you, as an AWAT pilot, to defend the southern coast of your homeland against the marauding invaders. The game begins with a series of options which must be selected before the craft can become airborne. The mission can be flown under summer or winter conditions. There are nine skill levels altogether, level one being a training mode. This is identical to a normal mission except that the enemy planes don't fire back at you.

Once proficiency at the controls of the aircraft has been achieved, it's time to arm the combat jet. There is a choice of equipment for multirole, air superiority, ground attack and naval attack capabilities. An unusual aspect of this flight simulation game is the two player option. A second player can join you in the jet fighter to take control of the weapons systems while you concentrate on avoiding the enemy's missiles.

The inside of the cockpit contains all the regular controls you would expect to find. There's also a rear camera so you can see if any of the baddies are creeping up from behind. If an enemy missile attack hits home, it's usually the rear-view camera that is the first to go. Most of the missiles can be avoided by taking evasive action and giving the plane a bit of the old pitch and roll routine. The radar shows any planes outside your range of vision either above or below you.

The object of the game is to destroy all the enemy craft in order of numerical superiority, as certain craft carry more points than others. As soon as the land and air targets have been reduced to scrap metal you can concentrate on wiping out the enemy naval fleet which comes in to rescue survivors.

Once airborne you have access to the onboard map. This shows the exact positions of the enemy planes and ground forces as well as the Allied bases which you must make for it a landing for damage repairs is needed. Fuel is a major problem. Flying at very high altitudes uses up a lot of fuel, and when the tanks get a bit too empty, a message flashes up on the screen to point out that a refuelling session is called for. Refuelling has to be done in mid-air.

If things get too hot to handle, there is always the option to eject. Try and eject over Allied territory, won't you? Skilled AWAT pilots are hard to find, and they're not much use cooped up in POW camps!

A surprisingly quiet game which responds well but looks a bit uninspired at times.