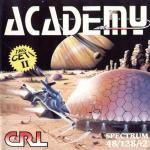 Pete Cooke's Tau Ceti amazed everyone when it was launched at the end of last year (reviewed in Gamer Nov 85) as everybody wondered how so much could be packed into a Spectrum's memory. Now in Academy (subtitled Tau Ceti II) there's even more!

Academy plots the rigorous training of a Gal-Corp Skimmer pilot as he endures a course consisting of fourteen missions each set on a hostile planet.

These tests range from the subtle 'softly softly' search for a base to 'if it moves...' where you must blast a robot invasion into submission.

Full details of the objective, scoring system and any additional notes are included in the mission briefing as well as any salient details of the planet and system it's set on. Such planetary effects include ionizing radiation storms that can disturb your instruments to huge red suns that destroy the I-R scanners.

Different climatic conditions and mission objectives mean that specific equipment is needed for a set mission. For example, a scanner is essential to locate a base whereas laser power and missiles are more important in a blast everything session.

Three predefined skimmers are available to recruits, the GCS Lenin, Lincoln and Wilson as well as a build your own skimmer kit.

The kit lets you customise your own design adding anythng you want within certain weight and cost limits. Therefore by juggling between low, medium and high power shields, engines and laser units, missiles, anti-missiles and flares, and extras such as scanners, jump and infra-red units, you can design your skimmer for the job even as far as redesigning the view screen.

During the missions themselves the gameplay is almost the same as the original Tau Ceti but with different objectives and a few more aliens.

The course is completed by a facility to save the game and any of your revolutionary new skimmer designs.

Complete a mission and your progress chart is upgraded. Complete all fourteen with a good enough success rate and you're ready for the real thing. After the Academy, the rest will be easy.

I'm always wary of sequels but this one is even better than the original game. Using the same impressive techniques, Pete Cooke has expanded his original idea into a quite remarkable game.

I'm always wary of sequels but this one is even better than the original game. Pete Cooke has expanded his original idea into a quite remarkable game.