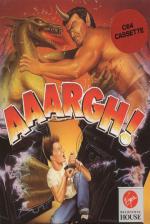 I hope you're not one of those weird bird watchers who spends his weekends climbing trees to nick eggs. I mean, firstly as interesting hobbies go it can't get that much more exciting than trainspotting and secondly... Aaargh!

Yup, the people of an obscure Pacific island used to go around collecting eggs and couldn't resist even huge Roc eggs. Now the island's two monsters have decided enough is enough, and have gone in search of the Roc eggs. You take play one of the monters, ether an ogre or a dragon, stomping through twelve cities, flattening buildings to collect eggs, massive hamburgers and humans. Giant hornets and cannons lob projectiles.

When you collect an egg you must fight the other, computer-controlled monster to get back to your treasure cave.

With Xybots and now Aaargh! this isn't a good month for coin-op conversions. Any hope of a competent conversion quickly vanishes upon sight of the main sprite and his 'movement' (maybe the dinosaurs all died of embarrassment), add to this some very dodgy collision detection and overwhelming odds of dying and it all falls to pieces.

The ultimate in entertaining visuals, though, has to be the matchstick men milling about when houses fall down - Lowry must be spinning in his grave!

Amiga Aaargh! lost a lot when the two-player mode was removed from the home computer version. The C64 game also suffers from this, and overly simplistic gameplay, but the main fault is the difficulty level. Manoeuvring your monster around village huts while dodging giant insects is frustrating and repetitive.

For very patient and forgiving fire-breathing monsters only.

Graphics 40%
The backdrops and main sprites are okay, but the men are moving 'i's.

Lastability 29%
Gameplay is tough and uninspired.