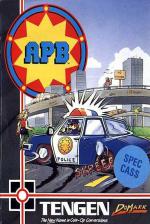 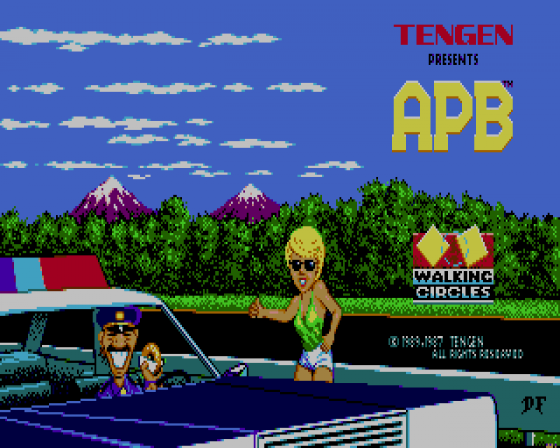 If you've ever wanted to become a policeman, here's your chance in this not-too-serious arcade conversion from Domark. Officer Bob is your name, and apprehending 'orrible villains is your game. But they're not your common or garden villains. There's none of this "'ello, 'ello, 'ello, what's going on 'ere then - you're nicked sonny" stuff here. No siree, Bob. Do that and you're likely to get a stick of dynamite stuffed up your nose. The felons Bob encounters are all heavily armed and don't think twice about taking pot-shots at approaching coppers...

The game begins with a practice screen in which novice rozzers can warm up by driving around a test track in their cop car. After that the action begins proper with Bob going out on his first mission. The game uses an overhead viewpoint, and the road scrolls past as Bob races along in his car.

There are a lot of criminals on the road, the most common being litterbugs. They spread rubbish from their cars, but can be arrested and fined simply by guiding the arrest cursor that floats in front of Bob's car over them and pressing fire. 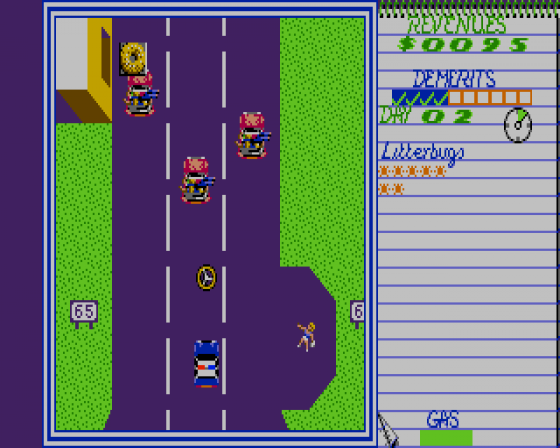 Every time Bob crashes he gains a demerit - too many of those results in Bob being chucked out of the force. The car also has a limited amount of fuel - running out also results in expulsion from the force.

Arrest your quota of law breakers and head back to the station to collect bonus points. On day two, the first of the big baddies appear - in this case Freaky Freddy the drug dealer. He drives around in a flowery hippy van and can only be apprehended by bashing him off the road. Arrest him and take him back to the station and you get the chance to force him to confess.

This is a really neat screen in which the shadows of Bob and his suspect, being clutched by his collar, are seen through an office window. Wiggle the joystick as fast as possible to get your confession - but be quick because the captain's coming down the stairs and if he catches Bob, he won't get a hefty confession bonus!

The game continues along these lines, with villains becoming tougher and tougher to arrest, and even more criminals taking to the road. Officer Bob certainly has his work cut out attempting to keep law and order!

The ST conversion suffers from jerky scrolling and sprite movement and rather indistinct graphics, but the intermission screens are great, and the use of samples from the original machine result in an amusing game that fans of the coin-op will love.

The Spectrum version is disappointing, though. It's a fairly accurate copy of the coin-op, but unfortunately has an oversensitive control method which makes it very difficult and frustrating to play. One for ardent APB fans only.

A humorous and original concept which is let down by jerky scrolling and sprite movement. APB fans will love it, but others mightn't feel so enthusiastic.

An over-sensitive control method and erratic car speed makes this very frustrating to play. One for ardent APB fans only.

A humorous and original concept which is let down by jerky scrolling and sprite movement. One for ardent APB fans only.