﻿ A View To A Kill (Domark) Review | Computer Gamer - Everygamegoing 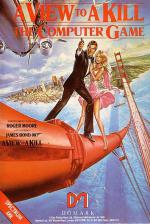 Bond has, at last, burst onto the computer screen. Tony Hetherington takes an indepth look at A View To A Kill

"My name's Bond, James Bond." At last the hero of British intelligence has burst on to the computer screen.

His first computer adventure is based on the current Bond film A View To A Kill and, like the real thing, the game is a big production.

It was originally designed by Tigress Marketing and was programmed by Softstone. The game is accompanied by the Bond theme which was digitised by Tony Crowther. Last but not least, the whole project was co-ordinated and the game sold by Domark, the company who brought you Eureka.

The game begins with the usual sequence of Bond walking across the screen, framed in a gunsight but just in time he turns and shoots, then blood covers the screen. All this is accompanied by Crowther's version of the Bond theme which is impressive on the C64 version but only a recognisable series of bleeps on the Spectrum.

The program actually consists of three separate games based on parts of the film. The first finds Bond racing a car around Paris while tracking the evil Mayday who is descending from the Eiffel Tower by parachute. In part two, Bond and his girl, Stacy, try and escape from the burning San Francisco city hall. Finally, in part three, Bond descends into a mineshaft to disarm the bomb planted by the villain who plans to trigger the San Andreas fault. This would then destroy Silicon Valley, making him the world's major microchip manufacturer.

After parts one and two, you are given a code which reflects your performance in that section. This is then fed into the next part and the action continues. This means that you don't have to perfect one part before you can practise the others. However, it does mean that you can't actually finish the game because you will be without some piece of vital equipment or have insufficient time to find and disarm the bomb in the mineshaft.

The Paris module of the game is a Broadstreet style, car maze game in which you have to track Mayday to one of sixteen possible landing positions.

The screenshot shows how the display is divided into five areas. The bottom of the screen has a plan view of the area of Paris you are currently in. The corresponding 3D view is shown above it. In between the two, are your car's controls, including a steering wheel that turns as you do, a speedometer and a real time clock.

To the left of the 3D view is a tracking device that shows Mayday's height and, to the right, a display showing the amount of damage the car has sustained.

Luckily, Mayday gives you a sporting chance to catch her as she circles the Tower before drifting off towards her destination. Ths gives you a chance to get into the centre of the road ready for the pursuit. This is important for if you drive too close to a wall, you'll find it difficult to turn corners which will halt your pursuit.

To add to your problems you will have to avoid numerous dead ends and the local police.

A few mapping excursions will soon locate the part of the map to avoid whereas the police pose a more difficult problem.

These will pursue you if you exceed the speed limit or go down a one-way street in the wrong direction. Unfortunately, you will have to do just that in order to capture Mayday.

There are two types of police car, white and red. The white cars shouldn't pose too many problems. If they get in your way they can be quickly despatched by a couple of shots from your Walter PP45. The red cars are another story. Some of them possess remarkable acceleration, and the best advice is to ignore them. At best they push you too close to a wall, making it difficult to turn or, worse, they will pen you in, ending your chance of completing the game.

I found Paris to be the easiest part of the game and was confident that I had a good code with which to enter city hall.

City Hall is a full-blown arcade adventure which would quite easily stand as a game on its own.

To the right of the room display is the date and time displays, and above them the command and object duckshoots.

These are operated either under joystick or keyboard control and decide your actions in the game.

Using the command duckshoot you can select actions such as Examine, Use and Give. The objects that you collect and use are stored in boxes in the other duckshoot and can be scrolled into view when required.

It is important that you learn to use this quickly and efficiently as you can't afford to waste any time.

Your first problem is the fire. You can slow down the rate at which it spreads, by finding water buckets which you throw on the floor in the next room to be consumed. You may also find a fountain from which you can refill the buckets.

However, this will only slow its progress and before you have any chance to escape, you will have to find some way to put it out.

The dynamic strewn throughout the building is certainly not the answer as if it is left to near the flames, it will explode spreading the fire even more. Consequently you should ferry this away to relative safety. Whatever you do, don't be caught to near the flames holding dynamite or they'll be looking for the next Bond.

You'll know when you're close to the fire because you'll slow down dramatically until you're overcome by heat. The room temperature is also displayed on the left-hand side of the screen, but I found that I was too busy to keep an eye on that.

Obviously all this frantic activity takes its toll on you and so you will need some refreshment. This you will find in the form of a drinks machine and you're left with the problem of how to get into it. There are a number of ways to do this but the only clue I'll give you, is that crime doesn't pay.

Before you tackle such problems you will have to navigate the rather tricky problem of getting around the place. This is difficult since most doors require either a key or security pass which the staff of city hall have hidden in the most unlikely places. Then again, if you find a door without a key or pass that fits you can also adopt for the subtle approach and shoot the lock off.

Be careful with this tactic, for as in the best films, you only have a limited number of bullets.

Finally, in your travels you should also find the combination to a safe, numbers that form the security code to get you out, Stacy, and an item that will help you find the bomb in the final part of the game.

This, the third and final part of the game, was obviously inspired by the excellent Impossible Mission. Bond runs (footsteps echoing), jumping and falls around the disused mine where the bomb is planted.

Your first priority is to collect some vital equipment that will help you find, the now converted Mayday, before you both try and disarm the bomb.

The most useful gizmo you will find is a rope complete with a grappling hook which can get you out of a number of tricky situations. The mine consists of a number of caverns and platforms dug out of the rock, punctuated by lifts and ropes.

Mapping this is a major task, but an important step to solving the game.

Again the screen has two duckshoots, but this time they contain useful commands such as CALL LIFT and WINCH UP and WINCH DOWN.

The two winch commands are used to lower you down the shaft that contains the bomb but before tht you have a lot to do.

For example, you need to find something to be winched down in, Mayday to do the winching and the code that will disarm the bomb once you get there.

This is in the form of numbers scattered about the mine but once you find them, you still have to work out the order in which to input them. Apparently, the clue to this can blow up sections of rock to allow access to other parts of the mine.

As in the other two sections of the game, the screen contains a real time clock but, in this instant, this will change to a time to detonation, when you find Mayday as she knows when the bomb is set to explode.

However, it will take most players many hours to get to this stage as you have to learn how to get around the mine without too many uncontrolled plummets.

Luckily Bond always lands on his head and so recovers, however vital seconds will have been lost.

In comparison, City Hall and The Mine are good enough to stand on their own. Consequently, the inclusion of them both, make the game excellent value for money.

I found the duckshoots easy to use and seeing the commands available, gave me some much-needed pointers early on.

The graphics, particularly the animation, are exceptional and even the scenes in the mine scrolled smoothly on the Spectrum version.

The whole package is completed by the inclusion of the opening sequence and the Bond theme.

All in all, a thoroughly enjoyable game and all I want to know now is when will Bond be back?

A View To A Kill is available from Domark for £10.99 in Spectrum, C64 and Enterprise versions. These will soon be followed by conversions for Amstrad and MSX computers.