﻿ A Ticket To Ride (Mastertronic) Review | Your Sinclair - Everygamegoing 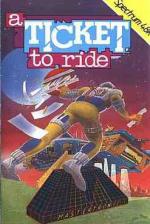 A Ticket To Ride might get some people nostalgic for the swinging '60's and other Beatles' hits. 'We can work it out' might be your cry as you grapple with this icon driven graphic adventure. But there's no real connection with the mop headed Fab Four as Mastertronic slings you into the future and your struggle to escape the Federation Outpost Selexia Central.

The aim of the game is to make your way to the outpost's docking bay with 2048 credits, a ticket for the ship, a permit and passport. If you don't make it in time, tough titanium, 'cos those Federation meanies are about to close the whole planet down. So as well as moving with speed, be prepared to wheel and deal - there are a few intergalactic sharks out there ready to make a killing.

Selexia Central (much like Finchley Central) is a maze of walkways linked with lifts. Most have a specific purpose, with something to explore - supplies, security, equipment. But do you have the time (or the credits?) to bother? The 16 icons variously allow you to enter doors, negotiate the lifts, sell, inspect, blow up or buy objects - even get character references on the shop owners.

Elsewhere on screen is a clock telling you how much game time has elapsed, your vigour quotient (pepped up by eating which I always forget to do), your score and how much nosh you have left. There's also an inventory of your objects. It's good to see the whole screen involved in game info. Perhaps I'm being mean to a cheapo but more effort seems to have been put into making the thing look good rather than in the nuts and bolts of a good maze or rattling pace. As my old mate Milligan says, A bird in the Strand is worth two in Shepherd's Bush, so If you really want a good graphic adventure it's got to be worth paying the extra for.

More effort seems to have been put into making the thing look good rather than in the nuts and bolts of a good maze or rattling pace.