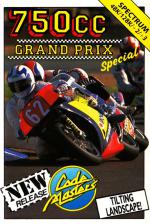 Brumm! Brumm! Screech! Yeah, fast action all the way in the new game coded by WASP (We Are Spectrum Programmers), 750cc Grand Prix. This is a motorbike racing came with a difference. Instead of watching a bike whizz and tilt around a normal track, the whole screen tilts in the direction of a corner, making the game much more realistic! There are six classic Birtish tracks and in each race you have to make it through the pack and finish in the top three.

Speed isn't all that's important: you have to think about the state of your tyres and petrol tank. After each lap you're given the option of stopping in the pits to change the tyres and fill up with gas. This usually loses your position but the time can soon be made up.

The only annoying thing is that at the start of the race all the other riders shoot off into the distance, leaving you on the starting line. If the game was true to life, they'd all be struggling to accelerate, too! Never mind, 750cc Grand Prix is a great bike racing game that gives the genre a new twist - literally.

A great bike racing game that gives the genre a new twist - literally.