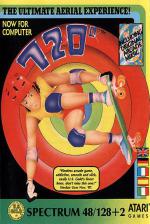 Wow! Brilliant! 720° was a rip roaring game in the arcades, was fun to play and addictive too, and as with most arcade machines, the most exciting things about it were the graphics and sound, which I s'pose is a bit like saying the only thing wrong with the world is everything, but I digress. Transferring all that excitement into the Spectrum requires a different kind of skill, and the team who transferred this megagame onto the Speccy, Tiertex, have really done a first class job. Okay, so the graphics are duochrome (two colours, mate) and all that remains of the dynamite soundtrack is a couple of squitch and frrrrrp noises when something significant happens in the game, like when get killed. But the remaining graphics are top notch, well animated and really give an impression of movement on a Skateboard.

You must skate your way around Skate City, doing tricks around town until you've earned enough points to compete in one of the Competition Parks of Jump, Downhill, Slalom and Ramp. In these events you must use your skill to earn medals, bronze, silver or gold, and points which allow you to buy tickets for more competitions. Why should you want to do this? Well, if you use up your tickets, you can't escape the killer bees... (What? Ed) Let me explain. You start the game with three tickets to tournaments, and going to tournaments allows you to get off the streets and away from the bees, right? (Why bees, I dunno, but just take it from me they're there.) So in order to survive, you have to earn more tickets by being skillo on the old skateboard. And so it goes on...

So, as I said, the game is crisply drawn and animated to rubber wheeling perfection. And what an addictive little number it is too! If there's a moment to spare in our busy schedule, this is what I reach for. A classy game and one for the hall of fame. (Hey, that rhymes!) Buy it, bucko!

A brilliant skateboarding arcade conversion that'll keep you rolling in the aisles, up the walls, through the pipes and down for perfect landing!

A brilliant skateboarding arcade conversion that'll keep you rolling in the aisles, up the walls, through the pipes and down for perfect landing! Buy it, bucko!