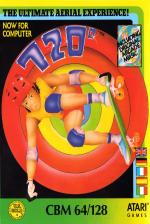 The conversion of the skateboarding arcade game, 720°, has finally arrived from US Gold.

The player starts in Skate City, which is viewed in isometric perspective 3D as a multi-screen scrolling area comprised of dozens of small ramps, water-troughs, shops and skate parks.

The skateboarder has three tickets, allowing entrance to any of the four parks dotted around Skate City, and is awarded an extra one at regular point intervals.

Each of the four skate parks hosts a different competition: half-pipe stunts, in which the player attempts to score a set number of points by performing tricky manoeuvres; downhill racing over a series of ramps; slalom course, where a series of gates are negotiated, and jumps, which requires the player to skate down angled ramps and avoid water jumps.

Successful qualification in a competition - gold, silver or bronze - is rewarded with cash and bonus points, depending on the quality of the performance. All four parks are attempted before returning to any, and failure to qualify costs the player money.

Between park visits, the player performs jumps on the streets or over the ramps that litter the playing area. Each successful stunt earns the skater points, and therefore tickets. In addition, the player visits Skate City's four shops to upgrade his pads, helmet, board and shoes, effectively increasing his skills and giving higher scores for stunts.

The player's stay in the main area is restricted by a time limit. When this expires, a swarm of killer bees gives chase - and if a park isn't entered quickly, one of the skater's three lives is lost.

Included in the package is an audio tape containing music from the arcade machine.

First impressions are really good, as US Gold have managed to capture the look of the graphics, and a fair deal of the sound from the original - especially if you include the audio tape (mind you, it seems that the music quality is highly subjective, as although many rave over the soundtrack, we were all reaching for the volume within seconds).

720° also plays much like its arcade parent, and this is really where both the strengths and criticisms lie. The game has the flair and slickness associated with the arcade machine, but with 720°, the original was lacking variety in play, and its conversion suffers likewise.

Although there are four parks, and lots of things to jump off and spin over, after an hour or so, you find yourself playing exactly the same patterns, repeating the same exercises, and generally getting bored. This is a good conversion, but isn't a classic by any means.

I've never played the arcade game, so I can't compare the conversion to the original - but it's certainy a very good game in its own right. The action 'feels' great, and the skater is very quick to respond to the joystick, which is necessary to negotiate him around the skate park's tortuous hazards.

The action is nicely structured, and I like the idea of having to keep on scoring to ensure a steady supply of tickets. The time limit is a constant worry, and trying to remember which park to skate to next, and which extra skating gear to buy keeps the gameplay bubbling along at a frantic rate. The graphics are a little sombre, lacking the bright colours normally associated with skateboarding, and some of the sprites are very blocky indeed - but the overall effect is pleasing, and the 3D convincing.

The only niggling point I have is that the gameplay become repetitive after a while, as there are only four different things to do. Still, those who like their action fast and furious should enjoy 720°.

The obvious comparisons between US Gold's and Electronic Arts' skateboarding games tend to favour EA's in the long run.

720° is a very good arcade conversion, but the starting material doesn't really hold much promise for a home computer game due to the limited variety. There are only four events, which are completed in more or less the same way every time.

Unlike Skate Or Die, there is little room for improvisation: after a while, a set routine is developed and stuck to for the remainder of play.

This is unfortunate, since the game is excellently designed, very smooth and quite entertaining. The worst part however, has to be the music - which is absolutely dire!

Sound 53%
Lively but aggravating version of the arcade original.

Hookability 90%
Action-packed, with a simple control method that makes it a breeze to pick up and play.

Overall 85%
A faithful and enjoyable conversion.

A faithful and enjoyable conversion... although it does get somewhat repetitive. Nice inclusion of the arcade soundtrack.