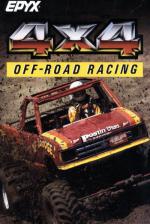 Quite how many folk are into off road racing in this neck of the woods is a bit of a mystery to me, so it is possible that 4x4 Off-Road Racing will disappear down that same dumper of dis-interest as the Shirley Muldthingie drag racing game of a few months ago.

I've always been of the mind that anything that conspicuously fails to show any screenshots on the packaging has to have a thing or two to hide anyway.

In the event, however, it's not too much of a horror story, just a bit uninspired. Taking its cue from those skateboarding games, it allows you first to customise your truck with tyres, winches, extra fuel and other add-on bits before setting out on the "toughest, roughest courses" in the world. This picking and choosing specifications is all very well, and makes for a nice extra to a game, but to be bothered doing it, the thing really has to be special in the first place.

Right, terrain picked, and difficulty level selected (you get to choose from four) and it's time to choose your truck. Each comes with horsepower, weight, and durability specifications, but it must be said, looks remarkably like the rest (especially from the rear) and performs not too dissimilarly.

All is well and good so far, unless you get annoyed at the painfully slow selection process which involves some dull punter sauntering up and down outside the shop front. Then - you've guessed it! - it's already time to turn the disk over and load the race itself. Quite how cassette owners could ever stand it I don't know.

As you can see from the screenshots, the race itself is not at all dissimilar to an inferior Buggy Boy. There are sticks, piles of mud and dropped spare tyres to avoid or jump over, and though it costs time, going up on two wheels is both easy and fun. Big rocks wipe you out whether you drive a little Katana or a hardy Highlander, and various items bounce out of the wreckage including the driver and a little dog.

The main difference from other driving games is that every so often big patches of mud appear, totally obscuring your path. The idea is to drive your 4x4 through, and while obviously it's much easier if you've thought to buy a winch to assist you, it is possible to rock your way out with the fire button in only a few seconds. This can damage your rig though, as can various collisions you might make happen to make, which takes you to a damage screen. Here you can repair the fault - an easy task when you've brought the right bits, but you lose endurance if you jury-rig it.

There are checkpoints to help you pace yourself against your opponents who you come across occasionally, and a "Doombuggy" to avoid, which is some homicidal maniac who tries to force you off the road. To be avoided!

All in all, 4x4 Racing likes like a fine idea for a game undermined by poor and rushed-looking programming. The strategy elements help to add something to what would otherwise be a pretty basic sort of race, but the quality of the sprites and backgrounds, and the very basic scrolling, make it very difficult to recommend. The trucks slide all over the place, and often appear to be walking as each wheel jolts up and down in turn in imitation of suspension!

It's a pity, because I'm a big fan of 4x4s, and would much rather play a good game based around them than, for example, the awful Roadblasters.

Poor and rushed programming means the trucks slide all over the place, and often appear to be walking as each wheel jolts up and down in turn in imitation of suspension!