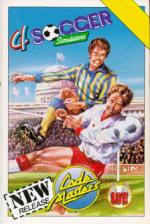 With games of the quality of MicroProse Soccer around, the competition in the footie sim market on the C64 is now almost as hot as the second round of the Sherpa Van Trophy. Codemasters' angle is to throw in not one, not two, no ladies and gentlemen, not even three... but four sims. Worra bargain, they hope you'll think.

Well, first off you can discount the pitiful Soccer Skills leg. Less interesting than Jimmy Hill's half time comments, it consists of practising penalties, doing sit-ups in the gym and such-like riveting activities. All this is displayed on miserly portions of the screen which do absolutely nothing to improve the braindeath gameplay. Well, then there were three.

The three remaining varieties are 11-a-Side, Indoor and Street. Initially, Codemasters' stab at the big match gives mixed impressions. The player sprites are small, but well defined. Play is concentrated on a small and non-descript section of the playing field and the pitch scrolls smoothly from goalmouth to goalmouth. Only the most basic attributes are adjustable, like the bounce of the ball and the length of the game. Essentially, all that has to be done is the collection of the ball by your player - who, in the time honoured fashion, will flash at you when you are in control - then belt up the field avoiding the other side and take a crude boot at the space between the posts. Nothing your average Sheffield Wednesday player couldn't do.

The sound is entirely unexceptional and there are some serious graphic flaws, like players losing their legs all of a sudden (and a Mark Dennis tackle nowhere in sight!), and balls going underneath the bye-lines. All this would be acceptable if the game was anything more than a basic kickaround. If the Codemasters programmers were a football team they'd be playing in the Vauxhall Conference.

Indoor Soccer is much the same as the big grown up variety, but with the added thrill of bouncing the ball off the boards. The game is slightly more fluent and the smaller pitch area means that there's a more realistic chance of finding one of your curiously static comrades, instead of the perpetual Mirandinha-like runs you're doomed to make on the 11-a-side game.

Fortunately, Street Soccer goes someway to redeem this package. No pitch here and none of those awkward fiddly little rules; you're free to get stuck into your opponents with an abandon that would make Norman Hunter look like Wayne Sleep. "Hack the other players and watch them roll around in road agony!"

This is actually fun and shows a modicum of originality. Garages, cars and houses all form obstacles which often have to be navigated. In the two player mode, this constitutes a very acceptable après-match entertainment.

Street Soccer looks good because it has little to do with real footie, much the same as the authentic estate knockabout. Football is a game of skill and subtlety - like wot Millwall play. The games on 4 Soccer Simulators are as flat and two dimensional as the top-of-the-head view you get of the players. This is one decent budget game tarted up to look like a full price game. I don't think anyone could really want three mundane versions of the same footie sim, let alone Soccer Skills - invest your money elsewhere. At least until Codemasters start selling Street Soccer for a couple of quid.