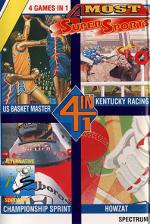 Blimey, not even room for a clever intro or anything.

A bit naughty this one - instead of getting a sequel to Super Sprint, you're getting exactly the same game again but with a track editor. So the game still suffers from the wondrous collision detection bug - because the programmers used attribute detection, you keep bouncing off walls that aren't there. Hurrah!

The editor's passable though a bit fiddly to use as you have to scroll through all of the blocks to get to the one you need. It also has very fixed ideas of what is an acceptable track and gets all huffy if you try to do anything clever, coming up with the message 'No way! Track does not make sense' when anyone can see it does so too. Far more entertaining than the game, anyway. 50%

Who comes up with these things? A conversion of the fairground game where you roll wooden balls into holes to make a plastic horse lurch along a track, this will last for marginally less time than it took to load. The actual execution is slick, with a running commentary as you pitch those balls, but why? Why? Why? 12%

A great little one-on-one basketball game, this. From Spanish chaps Dinamic, it's replete with comic touches and funky bits, from the giant animated (smug) basketball player at the start to the giant animated (non-smug) action replays when someone scores. Or should that be, when the Speccy scores? Yes. It plays a very tough game, even at the Novice level, or maybe I'm just crap. Anyway. I enjoyed it hugely and a small portion more than that after roping in a second player. Tackling (or whatever) is a mite too exact for smooth gameplay, but it's polished, action-packed and fun. Zilch in the way of lasting appeal, but then there's always something, isn't there? 74%

Oh heck. Wyvern's 1984 cricket sim lives again. A heady mixture of tables of statistics (that disappear when you choose a player to bat or bowl, so you have to write down who's good at what) and frame-by-frame graphics (after batting, you get the option to run as someone runs for the ball and chucks it back in a number of turns) it's one of those games that should have been drowned at birth. Let's face it. the only people who could possibly get any satisfaction from this tedious, rife-with-unexplained- pauses game will be out actually playing cricket. God bless 'em. 12%

So, do I give it a high mark because of Basket Master and mention the others in passing? No, I think it's time for a bit of putting the foot down. Slapping together four games under a crazily dodgy banner in an effort to clear the back catalogue of crap does not make for good value for money. Buying three utterly dreadful games for the sake of one reasonably good one would be silly. Spec-chums, stand on your principles!

Slapping together four games under a crazily dodgy banner in an effort to clear the back catalogue of crap does not make for good value for money. Buying three utterly dreadful games for the sake of one reasonably good one would be very silly indeed.
Logout