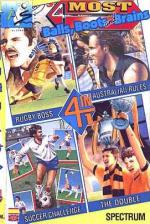 The Double involves managing a third division club, competing against 65(!) other, computer managed clubs and winning 'The Double', i.e. Both league and F.A cups in one season. Make up a winning team by buying and selling players and competing in the transfer market. The game is menu driven and includes settings for training and transfers, wages, ground preparations and treatment rooms. There's even one for informing the local rozzers of expected crowd levels at home matches. Finally, sit back and relax as the match results come through. Zzzzzzzzzz!

Instead of re-creating to mayhem and violence of the real sport, Australian Rules Football, the game succeeds only in being hard to understand and difficult play. In fact, ball control is so dodgy so that I rarely touched it during an entire game. There are four quarters of play, each lasting about three and a half minutes, during which you run around the field like a raving loony, kicking and punching your way, hopefully, to the touch line to win points. At any given time you control only one player, marked by an arrow. Difficult stuff dudes, not bad looking and with some real Aussie Rules features, but a real devil to play.

Hey! Now this is a new idea. In Soccer Challenge, you've got a chance to begin trials with your favourite footy team. Your job is to make a huge impression on the Boss by showing him all your flash skills and fancy moves, and get him to sign you up. It's not as easy as it sounds, you're going to need lots or skin and stamina, just to get through training! This is quite a good footy game with the added bonus of a code which you can use in the sequel, if you complete this one! What a nightmare.

In Rugby Boss you've just been appointed boss of a Rugby League Team. Your job, as always, is to create the best possible team, win the championships and collect assets tor the club. (Do I hear more snoring... Zzzzz!!) Responsibilities include team selections, banking, finances and of course, game tactics. Basically this game looks like a soccer management sim except it's not. It's rugger. But that's a poor excuse.

I'm not very happy with this pack. The most interesting game is Soccer Challenge, the next has to be Australian Rules Football. The rest are quite boring, formulaic games. Boots, Balls and Brains' only redeeming factor is that it has four games for £3.99

I'm not very happy with this pack. The most interesting game is Soccer Challenge, the next has to be Australian Rules Football. The rest are quite boring, formulaic games.
Logout