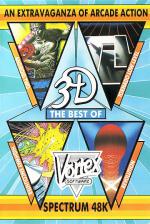 As a software house, Vortex has been with us since the earliest days; there have been few, but highly selective, releases from the hands of their main man, Costa Panayi. The record of success is indeed impressive - the average of the Crash Overall ratings for the four games included in this parcel is an astonishing 89%!

There's little else to add to what we've said in the past about each game, except that 3D The Best Of Vortex is well worth getting, even if you're missing just one of the games included.

This is well worth getting, even if you're missing just one of the games included.