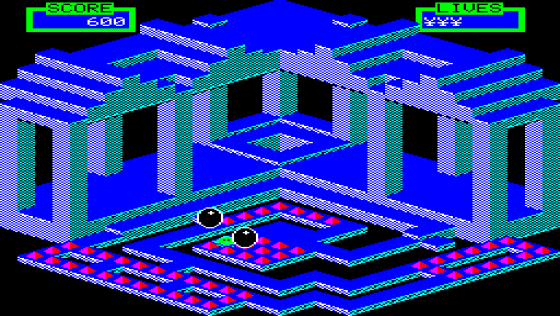 Squelch! You ever wondered what happened to all the slime that got deposited on Bill Murray in Ghostbusters? Weeeeell, he had a shower, see. And the slime went through the New York plumbing system. Now it is a little known fact that in the New York plumbing system there is a freak wormhole in the space/time continuum, and animated anti-matter runs amok in the sewer system.

In order to stay alive, the little slime blob (G'nite John-Boy, G'nite Slime-Blob) must munch its way through little piles of antimatter, whilst avoiding the mutant fourth dimensional bowling-balls which roam the endless subterranean terraces.

3D Slime is a Datalink program and is a very addictive little game. Actually it's not a little game, being a sort of 3D Pacperson meets Gyroscope. I couldn't leave it alone, and more interesting still is that, like most real arcade machines, the QL drops your score onto the MD cartridge for posterity. This will stay there no matter how many times you have to backup the game too, as it copies all the files.

A lovely looking, simple to play, but hard to master, game. Oh yeah, there's even a phoney spreadsheet screen on F5, in case the Boss comes in while you're playing it. Ber-rilliant!

A lovely looking, simple to play, but hard to master, game.