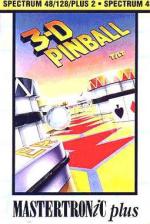 Pinball games have been around on the Spectrum since the year dot, so why have Mastertronic decided to produce another one? The only thing that makes 3D-Pinball any different to many of the others is that it's supposed to be in 3-D. All that's really been done is the pinball table has been drawn on an angle - the ball itself isn't in 3- D, and the game controls exactly the same way as any other.

There are no really special features about the table, all the bumpers and dials have been used hundreds of times before. They all have fancy names to make them more interesting though. 'The Black Hole' for example, is really a little hole at the top of the table and the 'Tombstone Targets' are three things that look like dominos!

The name of the game is collecting a high score: not too exciting, but all fans of pinball will find it a challenge. You are supposed to collect massive bonuses by spinning a gadget here and twiddling a thingamigig there. Trouble is that when I play, the ball only stays on the table for a couple of seconds! Sound effects are basic, with an interesting (ahem) 48K tune at the beginning of every game. Colour unfortunately clashes quite a lot, as you can see from the screen shot.

3D-Pinball will keep fans of the game occupied for at least half an hour as long as they're not expecting anything original from it.

will keep fans of the game occupied for at least half an hour as long as they're not expecting anything original from it.