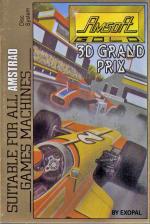 Grand Prix Rally II came close to being a good racing game but at last we have the real thing with this excellent simulation of formula one race action where you could be the next Alain Proat, or Nigel Mansell, or whoever takes your fantasy.

The action takes place on eight different grand prix racing circuits with 23 other cars in the race with you. The aim is to finish in the top three on each circuit which will allow you to proceed to the next. If you fail to make the top three, the game is over and you'll have to start from the first circuit again.

The screen view is of the car cockpit, nosecone and front wheels, with the track and cars ahead. Within the cockpit are gauges to indicate revs, speed, temperature and gears. There are also wing mirrors on either side showing the track behind the car and a status line at the top of the screen to indicate score, lap, position and hi-score.

You always start at Zandvoort in Belgium in pole position and with three laps ahead of you. The start of the race is signalled by two lights changing from red to green and allowing you to race off the line. There are four gears and neutral so you've got to work through these or you'll be left helplessly revving the engine on the line.

Your first place is lost almost immediately as another car races by you but this can be quickly regained as you blast into fourth gear. Cornering and passing other cars are the hardest parts of the racing and must be practised in order to defeat the opposition. The front wheels turn the car left or right with acceleration and braking also under your control.

The other cars will try to get in your way and also get past you. To avoid them on straights you have to squeeze by on the edge of the track and at corners they will always try to cut you up on the inside, forcing you to go round the outside of the bend. When cars approach from behind they loom large in the wing mirrors - you may be able to block them by weaving about the track, but not for long.

Collisions with other cars, trackside signposts or running right off the track will bring the car to a dead halt and after a short delay you will have to get back on the track and accelerate through the gears again. The grass at the edge of the track can be clipped with one set of wheels and this will slow the car down rather than stop it completely. This happens when you take a corner too fast and if you're really gunning it you may lose control completely and slide out.

If the engine is run at too high revs for long, it will overheat. This reduces the power output until it has cooled off, so particularly heavy-footed drivers may find themselves suddenly slowing and being passed by other cars.

Any delays may lose you positions in the race but to qualify for the next circuit you have to finish in the first three after three laps of racing. For the early circuits you can ease off once in the top three for safety, but on later circuits the other drivers improve and you'll be at the limit for the whole race.

N. Ear numbing sound effects.
N. If you fail to make the top three, you have to start all over again at the start.

Very enjoyable and very exciting. Motor racing's a bore to watch, but great to play on an Amstrad. Those other drivers though - they're worse than London taxis for cutting you up on corners. The circuits are cleverly constructed to give you only the slimmest of chances to overtake before you spin into a bend. The wing mirrors are a neat idea, allowing you to cut up the others as they have cut up unto you.