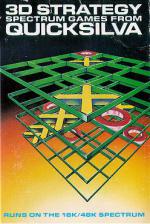 The instructions do their best to make you feel that, as a mere human, you have absolutely no chance of winning, and, indeed, I found it almost impossible to concentrate on all the possible moves.

It's easy enough to spot the winning lines on one level, but diagonal lines across four levels are another matter!

The board is displayed as four separate 4x4 matrices, and player and computer take it in turns to place a piece. There are two possible styles of play - TAC plays an active, risky game, while POS gives a deep strategic style.

There are two on-screen timeclocks, chess-style, and time limits may be set for each individual move or for the game as a whole. There are four skill levels and an auto-play mode, in which you can watch the computer play itself.

The 'best move so far' is displayed at all times, and there is a 'RESIGN' key for when the going gets too tough and your ego will not stand to see the computer demolish you.

Instructions are good, the screen layout is clear enough, and response times are very fast. Not particularly original, but well implemented

Not particularly original, but well implemented. Instructions are good, the screen layout is clear enough, and response times are very fast.