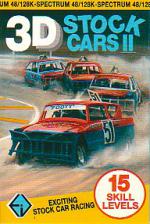 Faced with the prospect of selling the Garthmobile the other day, it was through misty, moistened eyes that I peered at 3D Stock Cars II.

Known as a conscientious driver, especially by my local police force and meals on wheels lady, the idea of smashing up a few cars without loosing my no claims bonus or being as stupid as the Meadowell Estate boys, is quite appealing.

The game itself has a very dated format: viewed from above, the game is most definitely not 3D and sound consists purely of a monotone engine notes for each of the four racing cars. However, where Stock Cars II really scores is in the options menu. Here you can choose which combination of the four tracks you want to race over and even the skill levels of the computer cars that you must race against.

For each track that you have chosen for your Grand Prix, you must first race around the track to get your grid position. Then it's onto the race which, once again, can be as many laps as you want as you push your pedal to the metal, (actually you press the fire button!) and go for it!

Nostalgic, bird's eye view racer nicely spruced up by the use of extensive options. Not the best budget racer by far, but the four player option and the degree of choice of tracks should persuade the racers out there.

Not the best budget racer by far, but the four player option and the degree of choice of tracks should persuade the racers out there.