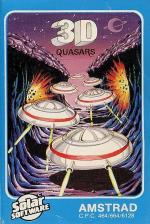 From the moment you set eyes on the cassette inlay, you'll know exactly what this game is all about - flying down a trench shooting things. The things are two types of alien spacecraft, while the trench is a breach in your defence system that you have to defend until it is sealed.

The trench appears with your ship at the bottom of the screen, and scrolls towards you. In the distance will come alien ships that loom down the tunnel at you. The ship can only move left or right in the trench and fire single shots along it. The alien craft don't shoot back but will do their best to ram into you.

The aliens come in progressively harder waves and your three lives are under constant threat. They always come in the same pattern though and the same number of ships will complete a wave. Learning the patterns will help you progress through the game although later waves need some luck as well. An extra life is awarded at 5,000 points but that's a score that will take some getting.

I was pretty disappointed with this, especially after liking Solar Software's other offering this month - the exciting shoot-'em-up Battle Beyond The Stars. 3D Quasars has none of that game's variety, and precious little of its fun. The good ol' 3D trench itself is quite well executed, with its throbbing lines giving a good impression of movement. But that's about all that can be said in this game's favour. The action is repetitive and soon became very boring - and I'm a shoot-'em-up fan. If you're still waiting to be converted to the joys of mass destruction, try a different game.

If you're still waiting to be converted to the joys of mass destruction, try a different game.