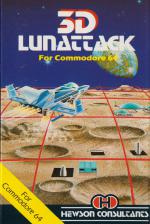 This is a sort of flight simulator, as you would expect from Hewson. You fly around the moon, attacking the Seiddab land and air forces while protecting your own fuel base. It's very complicated, and a glance at the instructions would be enough to put off anyone but a real enthusiast, which I must confess I am not.

There is a lunar map which shows your position and the enemy's. Unfortunately, it's difficult to tell which is which. Your craft can operate in three different modes, determined by the shape of your gunsight - square, octagonal or diamond shaped. It's difficult to stay in the right mode, the craft switched from one to another by means beyond my control.

There are seven enemy weapons systems; hard to identify and harder to shoot. There are also lunar mountains and craters. I wasted time trying to shoot these, having mistaken them for tanks.

Overall, I feel the graphics were not good enough to make a game of this complexity workable - but you may well disagree.

The graphics are not good enough to make a game of this complexity workable.