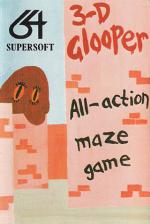 Ever had a nightmare about being pursued down a brick-lined maze, with no way out and things - nasty, huge, shapeless things, hungry things - just around each and every corner? No? You haven't lived. Supersoft's 3D Glooper (Commodore 64) evokes this ancient terror with all the unreal speed of the worst nightmares.

In fact, it's another maze game - but this time from the inside out. That is, you are the dot-gobbler in person, and what you see, friend, is what you get.

Joystick reaction is very fast, almost too fast - it would have been nice to insert a half-scroll frame between looking, say, straight ahead and the view to left, right or behind. As it is, you whirl like a dervish as you pursue the green dots on the pavement (Who left *those* there?) to infinity, never knowing when the Gloopers - big, furry blobs, quite lovable actually - are going to loom up and devour you. You are aided in the avoidance of same by a rather hard-to-follow radar screen; but my real complaint is that these cuddly-toy monsters (clones of the Dralon jobs that inhabit Sugar Puffs TV commercials) are just too easy to escape from.

A swift haul-back on the stick and you retreat - that is, the Glooper retreats backwards. Some penalty for failing to munch sufficient green dots against the clock might have made the beasties a little less easy to evade. Nice clear graphics, though, and good code, but despite the title, 3D Glooper is too one-dimensional to grab the sophisticates where they ought to be grabbed.

Nice clear graphics and good code, but, despite the title, 3D Glooper is too one-dimensional to grab the sophisticates where they ought to be grabbed.