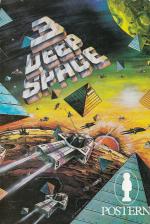 I was really looking forward to this program. It loaded perfectly, so I donned my 3D glasses and waited for the 3D images to appear.

The illusion comes from viewing a red and a blue image through separate eyes, and the instructions say best results come from having as pure a red and blue as possible.

I thought my TV/RGB monitor would be ideal but try as I might, I could not see a 3D effect.

I plugged into the TV port but that was no better. I dragged friends and relatives in to see if my eyes were peculiar - no, they couldn't see it either.

I read the setting-up instructions several times and the only thing I didn't try was a TV with adjustable tint control.

The mathematics say it should work but all we could see were separate red and blue images.

The game itself is mediocre, its chief attraction being the 3D effect which would be marvellous, I'm sure, if it worked.

Do get a demonstration before buying. The ratings are based on my findings.

The game itself is mediocre, its chief attraction being the 3D effect which would be marvellous, I'm sure, if it worked.