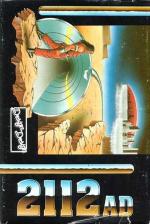 Apart from being a thirteen year old rock album, 2112 AD is the title of Des Des's latest game for the simple reason that it is set in that year. London in the scenario, is not the fair (?) city we all know today but in fact a massive computing complex dedicated to running the entire country. Everybody is free from participating in menial tasks as robots have been designed to do all the dirty work. Everything is ticketyboo until some naughty hackers go and play around with the system.

Now the supposedly benevolent computer is turning into a digital dictator, using the robots it designed for peaceful purposes to impose its reign of terror. Your task is to locate all the pieces of a Switching Code and insert them into the computer in the correct places. Ten of these are scattered around the complex. You have an electronic companion called Poddy to help you achieve your quest.

The game uses icons for control. These are displayed at the bottom right corner of the screen. There isn't enough room for all of these to be displayed at once so selecting a particular icon changes all those currently shown. To the left of the icon display area is a scrolling message screen used for both game and help messages.

Apart from a Help icon which sends information to the message window when selected, icons allow the control of Poddy, the carrying and use of miscellaneous items collected during the game, the ability to check the current status of both man and dog (or modify each within certain limits) and game options such as joystick selection. Double clicking an icon returns you to direct control of your character on the screen.

Graphics are somewhat akin to those employed in such games as Tir Na Nog as they use hi-res single colour graphic backgrounds upon which the characters move about. The main difference is that each room is a different screen. The characters may also walk into the foreground so the screen scrolls up and down to a degree. As the characters may also move behind objects on the screen, any that are likely to seriously obscure the view, disappear at opportune moments.

Most of the other characters in the game tend to be mechanical in nature. As these are con trolled by the malfunctioning computer, the most harmless looking robots have a habit of hampering you at every opportunity. Items may be placed in their way to stop them or if you have the first aid kit, you can often rectify any minor damage they inflict. For effective control of Poddy, he must remain within the immediate vicinity and this tends to slow you down somewhat until you become accustomed to controlling two characters. Also Poddy must be kept fully powered. There are various power points enabling this but if you neglect him, his usefulness inevitably suffers. Likewise, the main character must be kept fit so it becomes necessary to keep an eye open for food.

The game begins in the central location where the Code ROMs have to be placed. To ensure that they are being collected in the right order, when one is found it should be dropped in this room. If it appears in the special cells it is correct. If it falls to the floor, it has been returned too soon. It doesn't take long for things to get complicated.

'This game resembles Cuchulainn's adventure sagas in only the most superficial respects. It has some good original ideas and an interesting approach to gameplay. Although it takes a while to get used to the idea of dealing with two characters and a series of special function icons, once this familiarity is acquired, it becomes possible to get totally immersed within the game. However, the pace of action is such that unless you found the speed of Marsport satisfactory, you may well decide that this is a little slow for your tastes. Personally, I found it enjoyable to be able to appreciate the animation whilst dealing with the thought provoking problems the game provides'

'Oh dear! I'm the sole hope for humanity - well the UK anyway - in this game. DD have made a good job of the icons and the animation and scrolling are both very smooth. The lack of sound made a big impression on me, though why, I'm not sure. I don't think this one holds any major surprises, but it is better than the standard, run of the mill game. I think Graham Stafford could have done better, because the storyline has a lot of potential. It's the first Design Design game I haven't been mad on. The graphics, despite being smooth, don't seem to have anything over those of On the Run. You'll have to pull your socks up Design Design - I wouldn't want my favourite software house getting a bad name'

'I first saw 2112AD screens a few months ago from a very shy and retiring Graham Stafford and couldn't wait for the finished version with a robotised Poddy. the first thing that struck me was the way the screen was set up- a sort of cross between Filmation I and II, which creates a tremendous effect with smooth movements and detailed animated characters. Everything, except moving, is done via icons which are large, detailed and easily recognisable. All the things you can pick up could come in useful, and my problem was deciding what to keep and what to give to Poddy. (Don't forget, if you give him too much to carry, he slows down). Lots of pretty graphics and great games with little sound seems to sum up Design Design - and it works most times. One of my favourite games to date.'

One of my favourite games to date. Lots of pretty graphics and great games with little sound seems to sum up Design Design - and it works most times.