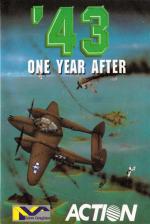 This is one of the first games from the Swedish software house Action (or more properly American Action) and written by Greve Graphics.

The game puts you behind the joystick of a P-38 fighter bomber during the American Pacific War. You fly from aircraft carrier to aircraft carrier, and fly over small pacific atols shooting as many Japanese planes as possible. Occasionally a large bomber will appear and you can kill that with multiple shots. As well as three planes you have three loops per level, this is for use in dire emergency, hitting space makes you loop high into the air, thus avoiding your attackers for a short while.

As the most astute amongst you will have guessed by now, 1943 is a close imitation of 1942. The Capcom coin-op shoot-'em-up that came out in its official guise from Elite Software a few months ago. The 'official' game was extremely disappointing, and failed to capture the spirit of the original coin-op game at all. The screen aspect was completely wrong, and this made the game more unplayable than it could have been.

1943 however, whilst drifting away from the original concept, is a much more playable game and has the right aspect ratio on the screen. The original coin-op game had a screen that was higher than it was wide. The official 1942 reverts to the usual computer screen that is wider than it is tall. This means that you don't get enough warning of an approaching enemy. 1943 puts the status information down either side of the screen and thus presents a more vertical screen section and makes the game play more like its original.

The penalty to pay is in the size of the graphics. In 1943 the planes are much smaller than in 1942, but this is an advantage in some ways as you can get lots more craft on the screen without it appearing cluttered and the graphics appearing too chunky.

The game provides 99 levels and a little map of the islands that you will be passing over on one side of the screen. It is very fast and extremely challenging. My one gripe is that landing and taking off at the end of each level takes far too long, though it is a good piece of animation and graphics, it get a bit boring after the second or third time. Look out for more from Action.