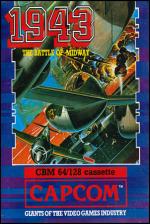 When you're not singing songs about there being "Nothin' like a dame", you're a rough, tough, cigar chewin' US Navy Pilot who likes nothing better than strafeing Japanese aircraft carriers and shooting down Zeros and bombers, all in the name of Peace.

So, up you go into the wild blue yonder in your P-38, scrolling your vertical way towards the Japanese flagship, Yamato, taking on the might of Emperor Hirohito. As you come across enemy forces, they bring their artillery to bear on your puny place, knocking down your fuel level - but in your defence you have a handy rapid-fire cannon.

Bump up your flagging fuel gauge by collecting POW symbols, or if you don't fancy that, you can always shoot the symbol to turn it into one of six fancy secret weapons, which range from ultra-rapid fire to three-way mega bullets. Who needs the atomic bomb? Not us, that's for sure.

With all the Commodore's hardware scrolling capabilities I'd have thought a vertically-scrolling shoot-'em-up like this would be an easy case for conversion.

No. Wrong again. The programmers have tried to create a parallax scrolling system whereby the clouds move faster than the surface of the ocean, hundreds of feet below. Great, but why then make the islands scroll at the same speed as the clouds, giving the impression that they are floating in mid-air?

Shoddy programming also rears its head when you reach a bomber or aircraft and everything slows to a crawl. Oh, and why does the program put extra weapons on the screen in the dying seconds of every stage, when you're unable to pick them up, let alone use them?

I'll admit that these are pretty superficial points and I could have put up with them if the game was at all challenging, but it's so incredibly easy to get such a long way that you'll have finished and dumped it on the shelf long before you've had your ten quid's worth.

Initial impressions of 1943 are that it bears some semblance of decency, but it only takes two games to prove the complete opposite. Why only two games? Well, this is how many attempts it took Maff and me to reach the very end of the last of the 32 stages.

OK, so there were two of us playing together but you know my record in the Challenge - to say I'm not the best gamesplayer in the Zzap! offices is a bit of an understatement, so how come even I reached the end of this on my second go?!

Even playing sogo I got well past the halfway stage!

The levels are just so short that the progress report which appears at the end of each stage is on screen for almost as long as the action.

Anyone who considers themselves an even slightly hardened shoot-'em-up veteran should be able to wipe the floor with this, so unless you're a very young player with a lot of moeny, I should leave it well alone.

Presentation 59%
One or two player team options available, but what happened to the rolls and smart bombs mentioned in the instructions?

Hookability 47%
Very easy to get into because you know exactly what to expect from this type of game.

Lastability 20%
Hardly any challenge and not much variation, so you'll probably only play it five or six times before it's left to gather dust.

Overall 30%
Technically poor and far too easy to be stimulating for more than half an hour.

Technically poor and far too easy to be stimulating for more than half an hour.