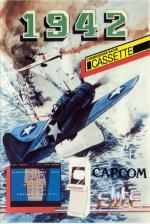 I haven't stopped playing 1942 since I first loaded it some 10.5 hours ago. The game is so addictive, fast, and furious that it must be my favourite shoot-'em-up to date.

The first thing that gets you when you load up is the brilliant music. But for the life of me couldn't think of the tune's name. It's one of those old war tunes that sticks in your mind and you hum it for weeks. After questioning the family, friends, and relations, Jasper the dog finally came up with the goods.

I can now reveal that the tune is from the film 633 Squadron, an old British war movie. Now back to the game...

The idea is to fly your aircraft from carrier to carrier across land and sea shooting down loads and loads of enemy planes. You guessed it - 24 stages of pure blasting!

At the start of each level, you take off from your aircraft carrier and head for the enemy. The screen scrolls up and you are attacked by nasty little planes which are willing to die just to stop you. These guys don't mess around!

If you shoot the right fighter, it will change into a special "POW" sign which, when picked up, will give your humble plane extra capabilities.

On the first couple of levels, you are given an extra gun, allowing three bullets to be fired at once, on later levels you get two escort planes which fly either side of you and help you battle on.

You can also protect yourself for a short while by doing a roll. When performing a roll you go out of the enemy's line of fire and can come out of the most vicious attacks unscathed. You are only allowed three rolls per life, and you have three lives.

When you have the extra planes and three guns you will find knocking out large bombers extremely easy - but you will be an easier target for small kamikaze planes to hit. When you reach the waiting carrier, a tune will play and you will be thrust onto the next level.

Some areas have different names, starting with Midway then Marshall, Attu, Rambual until you finally reach The Final Area. When you get there you'll know the meaning of the word tough!

The graphics are clear and colourful. Sound comes in the form of that fantastic tune, which really drives you on during the game, and also various spot effects which, although clear, are a bit flat.

The game is a blast, and if you don't buy it then you don't deserve a 64. It's that simple.

Well done Elite. Can we have some more like this?

The game is a blast, and if you don't buy it then you don't deserve a C64. It's that simple.