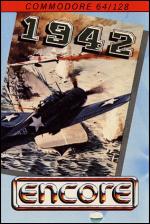 Guess which year it is? Yeah, that one, the time of the Battle for Midway island. You've been sent on a do-or-die mission to curb the terror of the Japanese onslaught, with nothing save a battered old bi-plane shielding you from their merciless firepower, 32 levels of sheer, unadulterated blasting action await you as you attempt to stop those Japs in their tracks.

Power-up icons can be collected, offering extra firepower, lives and an air-force escort. But those nasty Nips are a relentless breed, and they'll try anything to send you spinning to the bottom of the briny, many thousands of feet below.

This budget re-launch has breathed a new lease of life into the game. Sprites are well above average for a two pound product and, whilst background graphics aren't spectacular, the baddy-packed, atmospheric gameplay soon tears up any thoughts of lack of overall presentation. Sonic accompaniment is admirable, with a couple of pleasantly rousing jingles, although spot effects do seem to face into insignificance.

1942 is a re-release which does Elite's cheapie label proud. A classic budget game, crammed with the sort of mindless playability which gives you the feeling that you've wisely spent that last two quid for a change!

Sprites are well above average and, whilst background graphics aren't spectacular, the baddy-packed, atmospheric gameplay soon tears up any thoughts of lack of overall presentation.