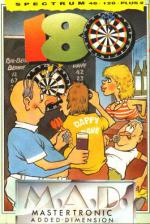 Up to the oche comes yet *another* darts game. Through to the quarter finals of the championship knockout, you go into the draw with such giants of the arrows as Delboy Des, Sureshot Sidney (a real gas), Belly Bil and Limp Wrist Larry.

The game is 501 straight in, double out, played over the best of three legs although the computer sometimes cuts this to one leg for no obvious reason that I can see, save that it is always the computer that has happened to win that particular leg. You always get to throw first, a decided tactical advantage and one that is crucial in the final against Jammy Jim who throws nine dart finishes as regular as clockwork (seven treble twenties, treble nineteen and double twelve).

When it is your turn to throw, a large hand appears in front of the board, shaking so much you can see why darts players have to keep knocking back the pints! Movement round the screen is diagonal to put you even further off your aim.

Keyboard operation is decidedly easier than using a joystick. A scoreboard on the left of the board chalks up your scores as each arrow thuds (hopefully) into the board. Should you achieve a maximum 180, the computer greets you a rousing rendition of "one hundred and eighty", although speech synthesis being what it is on the Spectrum, it comes out as more of a hissed "nuh-nuh-nuh-neh-neh".

Then it's time to sit back, slurp your beer and light another fag as your opponent has his three shots. The scene switches to a sideways view of the pub as Mega Mick or whoever takes his go. The blurb says to watch out for animated action in the background but all this seems to consist of is the barmaid sliding a pint along the bar to a customer, and a small dog relieving itself against a chair leg.

Other options in the game include a practice facility in a version of round the clock and the chance to play against a fellow human should the pubs be shut. 180 is not one of Mastertronic's better offerings, and I found it slightly surprising that they decided to bring it out on their more expensive Mastertronic Added Dimension range. Like most of my darts, 180 is way off target.

Not one of Mastertronic's better offerings.