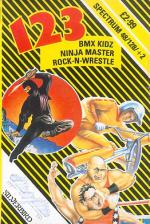 This presents something of a conundrum to the diligent critic. I mean, how much does value for money count? After all three games - BMX Kidz, Ninja Master and Rock-n-Wrestle - all previous releases on full price, now bunged together on a single cheapie: well, that's a bit of a bargain, isn't it? Well, yes, in that three games for three quid is never that bad a deal, and no, in that they're all crap. What we have here are three overcrowded genres, boxing, BMX and ninja, and three of the most tedious games in any genre yet to see the light of day. The first two I don't remember that well, but Rock-n-Wrestle is coming out now for the third time, and that's not including the 547 compilations it's already been crowbarred onto.

Nope, they just don't cut it. In the bin!

Nope, they just don't cut it. In the bin!
Logout