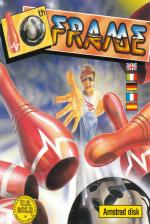 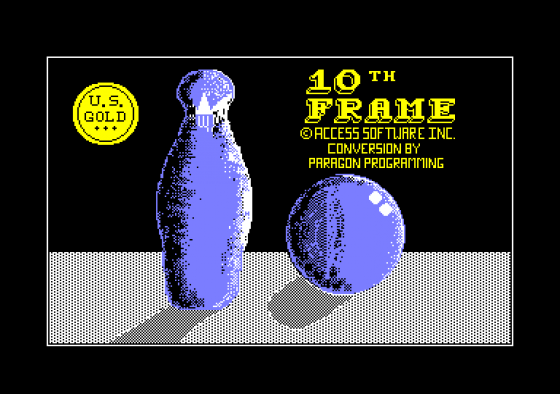 When the Ed said "howls", I thought he'd spotted another spelling misytake in the mag. A regular enough occurrence, you may think. Then he handed me one of those big cassette cases that looks large enough for The Beatles Collection, but only contains one tape.

Load game, answer silly questions, and my little character (male, right-handed) teleports himself into the centre alley. Must be a private showing, 'cos all the other lanes are empty. He is holding his howling ball, which looks much like a shaved coconut, and smoothly glides back and forth without moving his feet. In defiance of the laws of physics, he has white shadows on his black trousers.

His X-ray eyes cast forth a cross, which is where the coconut will be thrown to. Pressing the button on my faithful 'stick makes a speedo line shoot up in a black box (which blocks lanes six and seven, probably why this bowling alley is so unpopular). 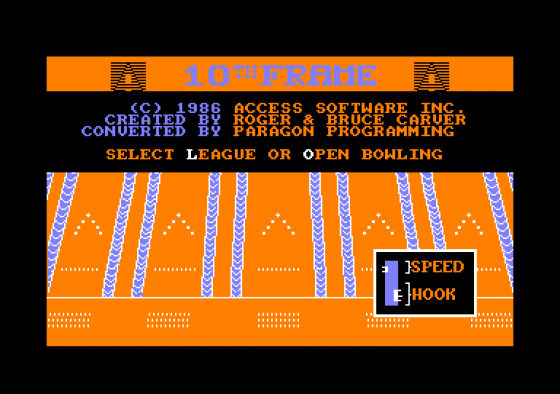 Letting go of the button stops it, only to start a line marked "hook" streak downwards. Press button once more, and it stops. Coconut streaks on to the hole at the end of the alley, and the bloke strikes a funny pose on one leg.

If you can figure out what the heck any of that has to do with the way you chuck a bowling ball, you're a better man than I am Gunga Din.

To me, the main appeal of bowling is the bar, which this program lacks. Shame really, 'cos you spend a lot of time waiting for cute little graphic effects to stack 10 howling pins, looking like a huddle of little pintas on the doorstep. Things whizz around, clearing away all the little dead bottles after every coconut is thrown at them. Fine for the first few frames, but wears a little thin after that. 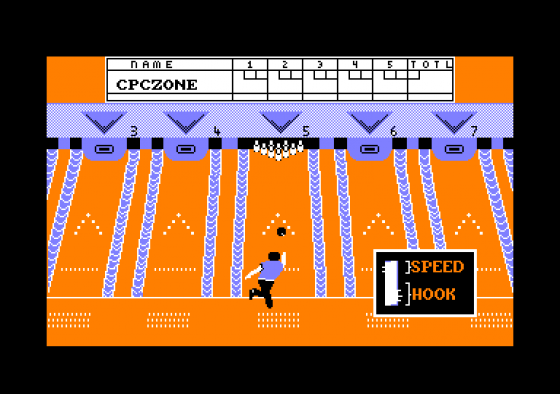 After the bottles have rattled down the drain, the bloke with the strange trousers stops standing on one leg, and teleports himself out of the way. Just in time too, as a flippin' great scoreboard descends from upon high to embarrass you.

The graphics are in four colour mode (raging red, brilliant blue, bright white, boring black), and the area of play is confined to lane five. A strip up the middle, about one fifth of the width of the screen. The inlay claims a perspective view; the coconut gets smaller and speeds up at the half way point.

Up to eight players can whang coconuts at milk bottles. I can just. see them all queueing up for this at a parties', can't you? The 'straddy does the scoring, so at least nobody can cheat. Though sore losers and bored players might just turn the thing off.

There was a time, before software houses discovered that educational software is a total waste of time - if it's bad it doesn't sell and if it's good it gets ripped off - when the grotty programs had a few arithmetic problems thrown in and were sold as being educational.

This reminds me of a typical counting for three-year-olds program. Problem is I doubt any three-year-old has the attention span to wait for the ball to roll the length of the alley.

Hype+hype+hype = naff game. I should have known that a photograph of Richard Tisdall grinning inanely while laying in a bowling alley was a prophet of doom aimed at swelling US Gold's boom of profits.

If they stopped spending money on marketing and someone who has to be sent angry letters before he'll send out software then US Gold could invest in some better programmers.

One Gauntlet doesn't make a summer. Bowling is about wearing silly shoes and laughing at friends. I know I'd laugh if any of my friends bought this. Thinking in terms of value for money the phrase "a waste of blank tape" seems to spring to mind.

Well, I'll try anything once. And this one is definitely a once only candidate. About all it did for me was to teach me how to keep score at bowling, and how to use the minimum screen area for playing a game in.

Take note, folks, how the word "real" appears within quotes on the inlay. This is what you do if you want to say something that saint quite true.

"All American Software." Just goes to show that the Yanks can't write programs to save their American backsides. I'll stick to pool.

Hype + hype + hype = naff game. In terms of value for money the phrase "a waste of blank tape" seems to spring to mind. 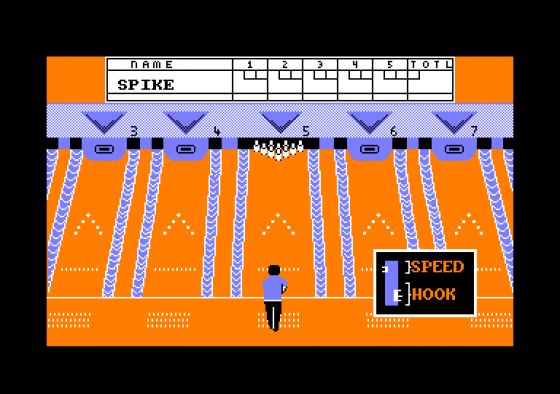