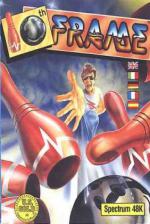 There's no sign, as yet, of the Spectrum version of the classic Leader Board from the American software house ACCESS (the people behind games such as Raid Over Moscow and Beach Head). However the latest ACCESS offering to be convened for the Spectrum has a similar style to the aforementioned golfing simulation. Tenth Frame is a ten-pin bowling game that includes all the features found in the alleys.

Before play can begin an options screen is presented, firstly offering the choice between league or open bowling. If the former is chosen you then have to input the name of the playing teams, number of players on each team (up to four) and the number of games to play (from one to three). The latter option delivers a screen asking the user to input the number of players (from one to eight) their names, the ability level (either kids, amateur or professional) and the number of games to play. When this information has been input the bowling can begin.

The screen displays a natural 3D view of the bowling alley from a position above and behind the bowler. The bowler appears at the end of the alley and is moved left and right by use of keys. Pushing the 'forward ' key activates a marker which appears hallway down the alley. Left and right moves it in those directions and using the marker you can aim where the ball is going to go (it crosses the marker as it travels down the alley). When everything is primed the bowler can be made to bowl the ball by pressing the fire button.

A 'speed and hook' gauge at the bottom of the screen is used to control the strength and curve of each players bowl. As the 'fire' button is depressed the speed indicator increases towards the speed zone. When it reaches this the 'fire ' button has to be released (otherwise an error will be incurred) and upon release the hook gauge comes into action, the indicator sliding downwards towards the hook zone. When it reaches this the fire button should be pressed, again the timing is critical - too much hook either side of the hook zone could mean the ball missing the pins altogether.

Each player has two attempts at each set of ten pins, a score is given and the next player bowls. The game continues in this fashion, the Score sheet being shown after every player has had their turn. The score is kept automatically, and incorporates all the different types of score, including spares, strikes and extras.

'I am disappointed with Tenth Frame, it should have been so good. It loses out in gameplay because it simply isn't real enough - the pins behave in a totally unauthentic manner, so you have to learn the 'physics' of the game before you can begin to succeed. Having said that, if you discover the correct method, it is possible to obtain a maximum score without too much practice. If you're a bowling freak this may appeal to you - if not, I wouldn't waste your readies.'

'Tenth Frame hasn't quite survived the transfer from the Commodore to the mighty Spectrum. Lost in the process is the sound and the atmosphere and a lot of the playability. The graphics areas good as can be expected - but a bit too 'wire-framey' to look very realistic. The game has all the basic features of bowling -unfortunately none of them are very well implemented or expanded upon. I'm sorry to say that Tenth Frame didn't really bowl me over (we're sorry that you said it as well Paul - Ed).'

'Ten pin bowling isn't a game I would recommend for conversion to computer, especially not to the Spectrum. In fairness though, us now have made a determined effort. Unfortunately, their efforts may well prove to have been in vain - the result isn't very good. The graphics are fairly average, with some nice animation on the bowler, but the game's biggest downfall is the annoying pause after every go. Overall, I think that Tenth Frame should be given careful consideration before purchase even by a dedicated fan of the sport.'

The graphics are fairly average, with some nice animation on the bowler, but the game's biggest downfall is the annoying pause after every go.